The brightly lit electronic overhang on I40W, headed toward its junction with Sam Cooper Boulevard, said “EXPECT THE UNEXPECTED.” Never mind that the message had to do with roadwork, it struck me that it might apply as well to the forthcoming Shelby County Democratic Party convention at First Baptist Church Broad, just west of where the freeway portion of Sam Cooper turns into a divided local highway.

So I was ready for the unexpected. The first sign of the Apocalypse came when, climbing out of my car in the church parking lot, bundled up against the prospect of wintry chill reviving the cold I’d had all week, I saw snowflakes falling and, walking through them toward the church just ahead of me, an unconcerned young woman in a blue T-shirt.

That turned out to be the delightful Mary Kyle, daughter of Chancellor Jim Kyle and state Senator Sara Kyle, there to join her mother at the party convention. For the record, the T-shirt bore a vintage election slogan of her late aunt’s: “Elect Anna Belle Clement O’Brien for Governor.” That unlikely event had not occurred, but — to skip to the chase — one that was close kin to it did happen at the convention on Saturday.

As unexpected as it was, Spears’ ascension to party leadership, after 32 years in the gruntosphere, made perfect sense. It was a reward for faithful service — including a recent stint as campaign manager for Deidre Malone, the Democratic nominee in last year’s County Mayor race. It was a nod to the longstanding prominence of women in party affairs (as in local social and civic life, generally). And it was a clear signal to Shelby County’s white population that the SCDP was not, as it has sometimes seemed in recent years, a monolithically black organization.

Asked about that last fact in the aftermath of her second-ballot win over runner-up Del Gill, Spears was discreet, diffident, and diplomatic. “I don’t know that that is important. I think it’s important that someone with my focus and experience and enthusiasm is chairman. And I think I’ve worked with almost everybody in this room, except for the new folks, on one campaign or another. So I look at this as all one group.”

Malone, who, in an exchange of roles this year, had been Spears’ campaign manager, addressed the point more freely. “I do think it’s important to have elected a white chair — and especially a white female. It makes a statement.”

Just as it might to elect a female mayor at some point, she was prodded? “Yes,” she nodded, in gratitude for the implied tribute to her pathfinding 2010 and 2014 mayoral campaigns.
For the fact is, American politics is all about constituent groups (or blocs, if you choose). The more different ones your party can address satisfactorily, the more broadly based — and successful — is your party likely to be.

For the last several years, the evidence of the ballot box has been that the Shelby County Republican Party has done a better job of being more things to more people, at least at election time. Winning campaigns, whether by the GOP or by individual Democratic candidates, have involved significant crossover voting. All campaigns based on appeals to a single bloc — on the assumption that a greater supply of registered African-American voters means guaranteed success, for example — have failed. You can look it up. In Shelby County as elsewhere, voters are more discriminating — in the best sense of the word; i.e., color-blind — than they are given credit for.

Randa Spears knows this, and the bi-racial majority of the new 29-member Democratic executive committee that elected her do as well. 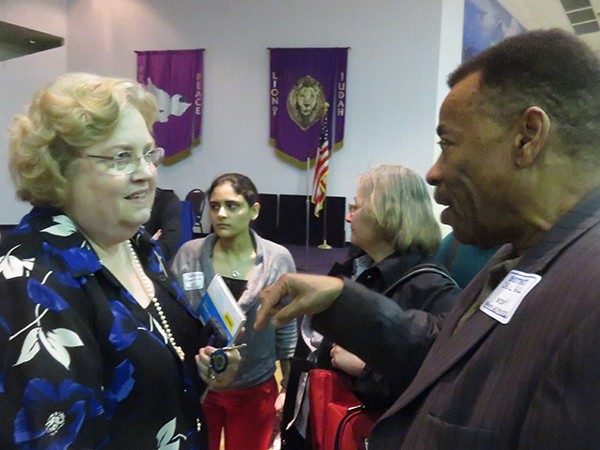 All the candidates on Saturday’s ballot had something to say for themselves. Gill could boast his four decades of party work, newcomer Jackie Jackson was a fresh breath, just a little too new to most committee members to win; and pre-convention favorite Reginald Milton, a well-respected County Commissioner, was conspicuous in his efforts to unite disparate party factions — if perhaps a mite too cautious and by-the-numbers about it.

Or maybe just too abstract. Politics is also all about trade-offs, and Spears’ victory owed much to longtime party broker Sidney Chism, who, for whatever reason, tipped his support, and that of his still significant network, to her.

Gill, who — all things considered — was not that far behind Spears, at 11 to her 16 on the second ballot, was visibly discouraged by this, his latest in a string of defeats. But, Gill being Gill, that did not mean he was prepared to fall in line behind Spears. Seemingly oblivious to the meaning of his inability to add to his original first-ballot-leading total of 11 on a second go-round, he put up a fuss at meeting’s end about some typically arcane hair-splitting issue — apparently, it was whether the voice vote of the new committee to continue the party’s bylaws should have been made earlier by the convention as a body instead.

The point seemed both anti-climactic and pedantic, and no complaints were heard from the ranks of the newly reconfigured party committee when Spears, politely but firmly, gaveled him down and moved on to complete the day’s business. She was sure-handed and no-nonsense about it, and that, too, was taken well by Democrats who of late have seen too much sleight-of-hand and wasted effort and too little focus on organizing for success. Still, she said she was willing to avail herself of the "wealth of experience" of Gill and whomever else.

On Sunday it's the ShelbyCounty Republicans' turn to elect a new steering committee and choose a new chairman — presumably either Mary Wagner or Arnold Weiner, the two announced candidates — at Bartlett Municipal Center.