Councilman pledges economic progress but says he will concentrate on the needs of citizens and neighborhoods, not corporations. 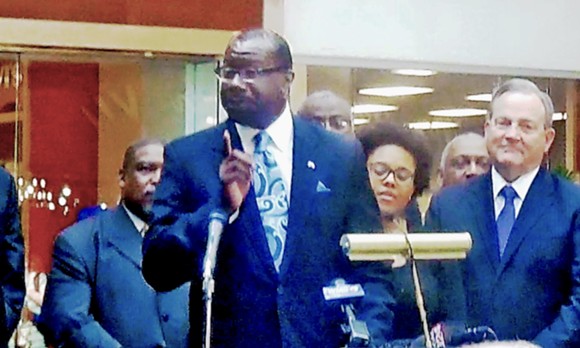 At first, a member of the crowd gathered at Southland Mall for Councilman Harold Collins’ mayoral announcement on Wednesday observed, the contingent of supporters gathered in chairs on the impromptu platform seemed a bit heavy with local clergy but light on heavyweight politicians.

A speech by event moderator TaJuan Stout-Mitchell, a former longtime Council member with assorted other service in City Hall, somewhat dissipated that impression, as did a stem-winding statement of support for Collins by current Council colleague Janis Fullilove, who had arrived just before the scheduled start time of 11:30 a.m.

Together with passionate proclamations from a couple of the gathered ministers and an endorsement from a white entrepreneur who praised Collins as a reliable facilitator of social and commercial progress, all of that gave the Whitehaven Councilman sufficient wind for his sails, and he went on to deliver a more than credible announcement address that was equal parts statement of platform, citation of achievements, and populist exhortation for change.

Collins began by stating his primary reasons for running in opposition to incumbent Mayor A C Wharton and whomever else. “I did not arrive at this decision without much trepidation,” he said. “The decision to challenge someone who has been a good friend is very difficult.”

The current Mayor, he said bluntly, had specialized not in administering to the needs of Memphis’ communities (several of which he called out by name), but in arranging opportunities for “only…a few people with special needs” — corporations, as he put it, not neighborhoods, not the “citizens who every year paid their property taxes and received little for their investment.”

He enumerated several projects and places he had played a major role in assisting within his own Whitehaven/South Memphis-based district — among them, Graceland and Elvis Presley Boulevard. Methodist South Hospital, Nike, a new Air Traffic tower at the airport, the forthcoming Eden Square, Southwest Community College.

“Why can’t our city have projects like these all over?” he asked.

He promised to “fight poverty, not at a rate of 1 percent a year, but now” and to increase economic opportunities for small business, women, and minorities, who, he said, had been awarded more than 50 percent of the action in developing the $16 million Tiger Lane project during his year as Council chairman in 2009-10.

He said he would focus on repairing the city’s infrastructure, exposed as woefully substandard by the recent harsh winter, and to take executive action to attract high salary jobs.

“We do not need another committee,” he said, jiving at Wharton’s habit of relying on ad hoc task forces and study groups.

All in all, Collin’s speech had been effectively balanced between pledges to bring about more commercial progress and promises to end what he saw as the overlooking of ordinary citizens. And he concluded with a rousing mantra, repeated several times: “I still believe in Memphis…I still believe…I still believe!”

Fielding a few questions from reporters in attendance, Collins professed confidence that he could raise enough money and popular support to win the Mayor’s race against better-heeled opponents (presumably Wharton and Council colleague Jim Strickland, both of whom have raised stout amounts of cash); he said the six-month wait between his appointment of an exploratory committee last October and his announcement on Wednesday was due to his need to assure himself of a groundswell of support and to assess the nature of community needs; and he pledged “not to be negative but to tell the truth.”

He promised to maintain the city’s police force at a level of at least 2500 officers, and to balance swift and severe punishment for criminal acts with serious rehabilitation efforts.

He said Mayor Wharton had been entitled to appoint Jack Sammons as city CAO but was firm ion his support of a Council amendment in favor of state law requiring that Sammons leave his post as Airport Authority chairman in order to serve in city government.

“And, do you mean to tell me, with 640,000 citizens, we couldn’t have found somebody else?” Collins asked rhetorically.

Lastly, he responded to the encouragement of a woman from Chicago who said Collins reminded her of the late former mayor of that city, Harold Washington.

“I promise you this,” said Collins. “I will work hard for you and the legacy of Harold Washington.”

The detailed nature of his general presentation, as well as the grand sweep of that last remark, certainly indicated that Collins was prepared to go hard and then some in pursuit of the Mayor’s office, and that he has enough energy, experience, and populist flair to attract voters.

Several questions remain, especially in view of his relatively late entry: Can he raise the money, and does he have enough of a network to compete against presumed front-runners Wharton and Strickland, as well as a Balkanized field including the County Commission’s Justin Ford, the Memphis Police Association’s Mike Williams, and the prospect of others yet to come before filing is over in July?

One question Collins seemed to answer on Wednesday: He is indeed prepared to work hard.