Despite Competing Partisan Claims, the 2015 Legislative Session Was Neither a Grand Success nor a Total Flop

Rhetoric and real differences notwithstanding, there was a fair degree of bipartisan consensus. 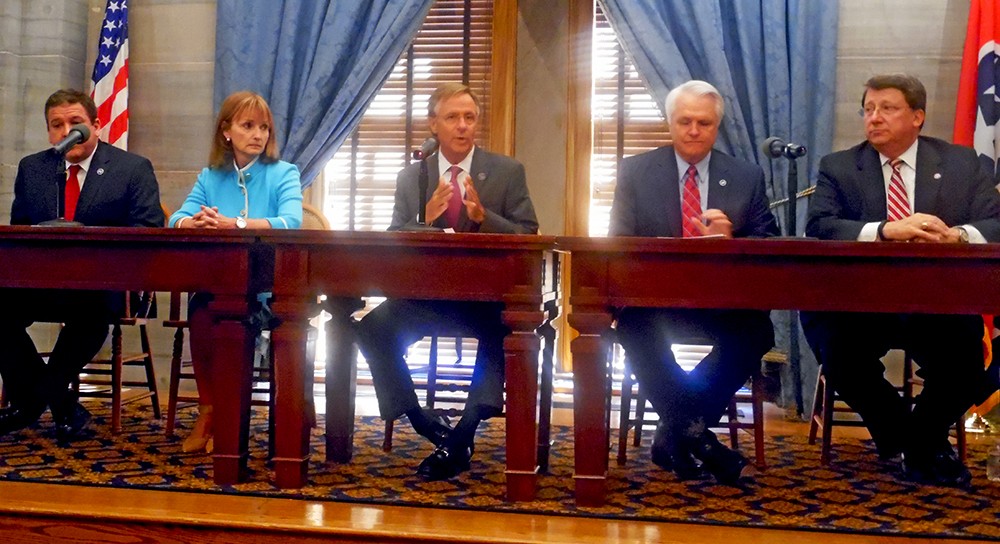 NASHVILLE — Two sets of post-mortems on the 2015 session of the Tennessee General Assembly were held Thursday morning in the state capital — one by Governor Bill Haslam and the Republican leadership, another by the leadership of the Democratic legislative minority.

“The primary constitutional obligation of the General Assembly and the Governor is to present a budget that balances. This actually was an extraordinary year; not only did we do that, but if you think about it, the hardest time to govern is when you actually have extra money." An A grade, all things considered.

Half an hour later, over in the Conference Room 31 of Legislative Plaza, it was the turn of House minority leader Craig Fitzhugh, standing primus inter pares among some 18 of his party members from both chambers (the total number of Democrats in both is 30, out of a total of 132).

Said Fitzhugh, by way of starting up: “We legislated quickly, and we passed a budget. That’s about it.” Inasmuch as the veteran Leader from Ripley was among the many in both parties and both chambers who had felt rushed by the session’s hyped-up pace and among the few who could not bring themselves to vote for the budget, that was a failing grade.

In fact, both Haslam and Fitzhugh were exaggerating.

The Governor actually made the claim that “all of what you would call Governor’s bills were passed,” when his most important initiative of all, his Insure Tennessee Medicaid-expansion plan, was blocked in both the special session that began the legislative year and in the regular session. 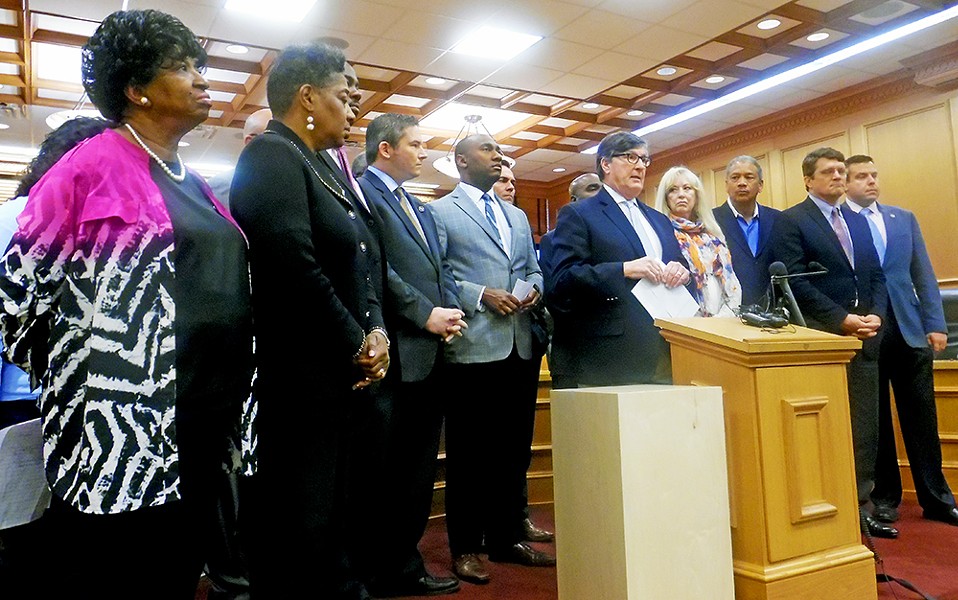 And, while Fitzhugh made a point of naming the failures of Insure Tennessee and of a late tax-relief bill to benefit veterans as reasons for his displeasure, it was also true that several measures opposed by Democrats were blocked as well, and by a bipartisan coalition. Among those were a bill to allow de-annexation of rebellious communities from cities and, for the third or fourth year in a row, a bill allowing for a modest school-voucher start-up.

True, a GOP-backed bill to strike down local options on banning guns in parks passed both chambers, but Haslam has made clear his disagreement with the bill and said on Wednesday that he would decide within a week — maybe as soon as Friday — whether to veto it.

UPDATE: To the surprise of most (and the acute dismay of many) the Governor signed the latest guns-in-parks bill on Friday, abolishing thereby the freedom-of-action of cities and other local jurisdictions regarding firearms in their park areas.


There was actual bipartisan concord on several matters — including virtual unanimity in passage of a home-grown educational standards bill to replace Common Core that was so similar in nature to the much-abused original as to be its fraternal twin.

And even the late failure in the House (on Wednesday) of a bill to permit in-state tuition for undocumented immigrants was not due to partisan disagreement — though a GOP right-winger, Rep. Matthew Hill (R-Jonesborough) may have sullied it for some Republicans by comparing it to President Obama’s immigration directives. The real problem may have been the absence of two Democratic supporters from the vote, both for work-related reasons.

House Democratic caucus leader Mike Stewart (D-Nashville) did what he could Thursday to deflect possible recriminations against the two, Bo Mitchell and Darren Jernigan, both from Davidson County, by saying, “This is a citizen legislature. Absences are going to happen.” The fact remains that the bill fell one vote short of the 50 needed for passage.

Stewart was less forgiving in the case of Insure Tennessee’s failure, clearly brought about by the failure of the Governor’s own Republican Party (with some exceptions) to support it. An “extraordinary failure,” the Democratic caucus leader called it, and, indeed, even as Haslam vowed at the GOP availability to continue supporting it as “the right thing to do,” Lt. Governor/Senate Speaker Ron Ramsey, sitting to the Governor’s immediate left, opted out loud for the alternative of a two-year scenario involving election of a Republican president in 2016 and conversion of Medicaid funds into pure block grants.

The Democrats, for their part, vowed to renew their support for Insure Tennessee. Fitzhugh announced that the combined party caucuses would be sending Haslam a letter before the week ended beseeching him to call another special session to deal with the measure. It’s fair to say that’s pretty unlikely, and the fact that next year is an election year decreases the likelihood of action in the 2016 session as well, especially given the scenario spelled out by Ramsey.

The Governor had expressed pride in getting safely through two “contentious” matters in the session just concluded. One was the Common Core matter, and that could be stacked up with other education-related successes of the Haslam agenda, including the roughly $170 million in “new money” appropriated for K-12 education and backing for higher education initiatives as well, including Drive for 55 and Tennessee Promise, both aimed at raising the level of adult post-secondary education.

Haslam was on thinner ice in expressing satisfaction in how the legislature had skirted (to his mind) major controversy in limiting anti-abortion legislation to the imposition of a 48-hour waiting period. The Democrats made whoopee on that matter, regarding which Planned Parenthood and various organized women’s groups remain outraged. “Their mission is to change the way women live. They are taking their rights away,” Rep. Sherry Jones (D-Nashville) maintained.

Still, a fair assessment of the just-concluded session from a neutral observer might be: Could have been worse; surely could have been better. Some of the outright wack stuff, like the attempt to make the Bible an official state book, was beaten down by bipartisan action, and there was intermittent harmony on other issues as well.

One such was the hectic pace of the legislature’s increasingly abbreviated sessions — an innovation that, quite obviously, has been driven by Ramsey, who has set mid-April adjournment deadlines for a body that in recent years had continued its deliberations well into summer.

At the Republican leadership availability in the old Supreme Court chamber, Ramsey had expressed pride in what he called cost-conscious “efficiency” gained from the sped-up pace and claimed, “We didn’t even feel rushed.” But, after a brief pause, in which he must have noticed either slight murmurs or rolled eyes out there among his auditors, he added, “OK, we were rushed.”

Earlier Thursday morning, a bipartisan group of legislators having breakfast at the Red Roof Inn, a modestly priced alternative to the state capital’s more expensive hostelries, sat together, grumbling about what they saw as a much too frantic pace, which one or two of them attributed to Ramsey’s need to get about his auctioneering and real estate businesses as early as possible in the spring.

In any case, these legislators agreed that key bills were being overlooked in the undue haste and some, like the in-state tuition bill which they all happened to support, had fallen victim to it. If there is a true bipartisan consensus developing on any one matter, this matter would seem to be it.

In any case, here it is, still April, and the General Assembly is over and out.