That Rosy Consensus on a School Funding Increase? Gone.

Public school education in Shelby County may never again become the political football it was during the years of merger/de-merger controversy, but it’s begun to move in that direction again, for purely budgetary reasons.

Not quite two weeks from a request for additional funding by Shelby County Schools superintendent Dorsey Hopson that occasioned a reaction from Shelby County Commission members that several observers described as a “love-fest,” the thrill is definitely gone, and the $14.9 million add-on money sought by Hopson now looks like so much pie in the sky — in a very overcast sky, at that.

At a special Commission meeting on Monday, called by budget chair Heidi Shafer to re-examine the issue of school funding in general (and funding in relation to three initialized considerations — BEP, OPEBs, and MOE — in particular), some plain talk got said, and it tended to dissipate pretty thoroughly the idea of a funding increase of the size Hopson requested, or perhaps of any size at all.|

Shelby County Mayor Mark Luttrell — who attended the meeting and, along with his CAO, Harvey Kennedy, and CFO, Mike Swift, intervened at key moments — laid it on the line, bluntly: “We cannot afford $18 million [the amount of Hopson’s request, plus an additional amount that would be routed by average-daily-attendance (ADA) formula to the county’s municipal schools].”

And Luttrell topped that by adding, as an aside to SCS representatives on hand, “You might try looking at lay-offs.”

One of the issues, clearly, is the mayor’s concern that his proposed 2015-2016 budget of $1.18 billion, which must be acted on by the Commission before the fiscal-year deadline of July 1 has been squeezed down to a level that avoids the need for a tax increase this year — although subsequent teasing by various county hands has revealed a de facto surplus of $6 million that is theoretically available for ad hoc needs.

That yields another issue, one alluded to even at the aforementioned love-fest of May 6 — the fact that SCS officials have chosen not to tap an accumulated fund balance of an estimated $178 million to cover the projects they want paid for.

School officials have accounted for this reluctance in various ways — some roundabout, some not, some (in defense of maintaining a healthy reserve) even common-sensical — but Commission members seem much less inclined to indulge SCS on the point than they were two weeks ago.

Said Reaves: “The reality is, how do you justify having that much money on saving acccount and asking for $18 million? It’s tough to justify.”

Commissioner Walter Bailey, arguably the most lenient Commission member on budgeting for schools, asked the SCS reps a series of questions designed to establish the point that they had already cut their ambitions for next year’s budget to the bone. But he got very little backup from other Commission members, even the most SCS-friendly among them.
Clearly, the likelihood is that SCS will be forced to scale back its dollar request — much of which is being sought to keep up funding for various educational strategies that were formerly taken care of by expired or expiring grants from the Gates Foundation and the Race to the Top federal competition won by Tennessee.

The fate of SCS’ fund request was really just a sideshow to the meeting’s main purpose — which was to look critically at the county’s school-funding predicament vis-à-vis the aforementioned alphabetized issues: the state’s Basic Education Plan (BEP), under which jurisdictions here and elsewhere in Tennessee are being short-funded; OPEBs (Other 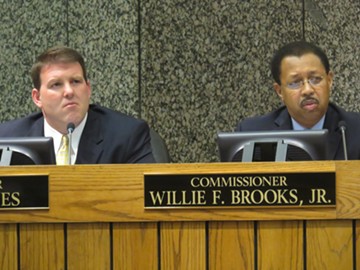 post-employment benefits), meaning the benefits contractually owed to retirees in addition to pensions; and MOE (maintenance-of-effort funding), the educational-spending minimums prohibited by the state from being reduced for any reason other than drops in student numbers.

On the BEP matter — which, if successfully resolved, would significantly relieve the spending crunch for SCS and other school jurisdictions — there was general agreement all-around — that the state, for fiscal reasons of its own, has been dramatically under-funding the local governments that fund school districts, depriving them of the amounts to which they are legally entitled by the BEP 2.0 formula.

Hamilton County government is even now suiting the state in this regard, and the Shelby Commission, already involved in lobbying efforts along with Tennessee’s other major urban areas, is considering whether to seek redress by filing suit along with Hamilton County. Wesley Robertson, a county government consultant from Nashville, told the Commission, “In Tennessee the only change in education funding has come from a lawsuit. If Hamilton County is successful, everybody’s going to benefit.”

It was on the matter of OPEBs that Luttrell had become most didactic, pointing out that, while county government had seen the writing on the wall regarding the escalating unaffordability of such costs, “others had not,” and he specified Shelby County Schools as a major procrastinator. Memphis, too, had belatedly begun to reduce OPEB costs, almost to the vanishing point, and he suggested it was high time SCS did the same.

County Financial Officer Swift turned the screw a little tighter, noting that at current levels of obligation, OPEB costs would be costing SCS something like $94 million annually — a sum which, he said with classic understatement, did not seem “feasible.”

Commissioner Terry Roland reactivated the old city/county dispute over school merger when he asked if OPEB costs accrued by the old Memphis City Schools system should have been invalidated by the MCS charter surrender of 2010 rather than continually being charged to all the taxpayers of Shelby County. At another point, Roland suggested that SCS (most of which is the old MCS jurisdiction plus some outlying county areas) could square things by donating “$25 to $30 million” from its fund balance to cover OPEB costs.

(SCS chair Jones would let it be known that her board had included a discussion of revising OPEB expenses on its Tuesday night meeting agenda.)

The status of MOE obligations on Shelby County government at large was treated as a related phenomenon, but any hopes of getting to the bottom of it were fairly well scotched by a consensus view of the administration and county attorneys that MOE amount for a given jurisdiction were predicated on the third year of regular spending cycles, but that that formerly establishing spending levels had been disrupted twice since the MCS charter surrender of 2010 — once by the 2013 merger and again in 2014 by the de-merger brought about by the creation of six suburban school districts.

Each change had produced a new three-year fiscal cycle, making it all but impossible at the moment to pinpoint specific sums — the only known quantity being that reducing the level of educational spending is prohibited by the state.

The Commission will give all these matters another go-round on Wednesday, its committee day.