Declares unequivocally regarding alleged either/or arrangement, "My destiny has nothing to do with his destiny," 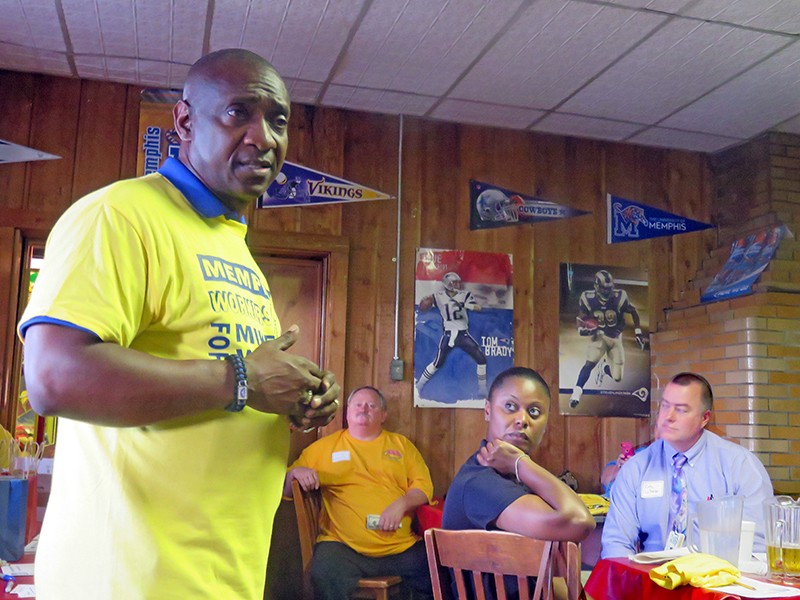 As followers of the current 2015 city election know, things have hit something of a slow patch. Though there are still bound to be some surprises between now and July 24, the filing deadline, most of the significant candidacies for mayor and the various City Council positions are well known, and the races are several months away from really heating up.

One matter that at present is managing to generate some current suspense, though, is the question of the so-called compact between Memphis Police Association president Mike Williams and former School Board member Kenneth Whalum, longtime friends and allies, whereby if one of them ends up on the roster for mayor, the other will not.

This arrangement is spoken of as a live matter, however, by only one of the two alleged parties to it — Whalum. The New Olivet Baptist Church pastor has, for several months, answered all inquiries into the situation with variations on the formulation that “if Mike runs for mayor, I will not. I’ll run for something else.” On April 17, when the Election Commission first made candidate petitions available, Whalum picked up three — for Mayor, for City Council District 5, and for City Council Super District 9, Position 2.

So he does have options.

But all this time Williams has shied away from directly acknowledging the reality of an Alphonse-Gaston, you-or-me arrangement with his friend Whalum on who should run for mayor. “He has said that,” Williams said of such an arrangement on Thursday, the day that he himself finally picked up a mayoral petition from the Election Commission.

And, said Williams on Thursday, he has heard some of the same rumors that others have, to the effect that Whalum — thought by most observers, as well as by the Reverend himself, to be a stronger potential candidate — may be rethinking his commitment to an either-or arrangement and is increasingly thinking of making a race for Mayor, come what may.

“He’s making noise like he is,” said Williams in an interview after addressing supporters at Broadway Pizza on Broad Thursday evening. And he elaborated on his own position. “I have never asked Whalum, not one time, about not running….I have not thought about what he’s going to do. I’m’ just moving at my pace. Even if he runs, we’re still going to be friends.”

So there is no agreement? “I’ve heard him say it, but, like I told you, I’ve never asked him not to run.”
Will Williams keep on running if Whalum does make his own mayoral run? “Well, yeah, ‘cause my destiny has nothing to do with his destiny.”

There still seems to a bit of conditionality to things, however. Asked to evaluate the degree of certainty attaching to the likelihood of his own filing for Mayor (as against merely picking up a petition), Williams said, “As time goes on, we’ll see, because I think I’m picking up a lot of support, and I’ve been out here for a while.”

Indeed, he has. Besides events like the one Thursday night, attended by a good many of the off-duty police, fire, and other employees whose anxieties over city budget policy he has championed, Williams had made speeches to groups as various as the Midtown Republican Club and to the local Tea Party organization.

Not to mention a set of brand new campaign T-shirts to hand out, as they were Thursday night.

“My message is not going to change,” Williams says.

And that message, as he declared it once again at Broadway Pizza, goes like this: “We have allowed individuals to run this city for their own purposes, and we have not been allowed input to what’s been going on. We need to give the City of Memphis back to the citizens. This is our city.”

A supporter of rehabbing and retaining the Mid-South Coliseum, he says the representatives of the governing city establishment “are going to tear down the Coliseum anyway, because that’s what they want to do.”

He thinks bike lanes have been put where they shouldn’t be, against people’s wishes; that “we’ve been hoodwinked into giving up our [city] education system,” turning over “a $1.1 billion business” to the county; and that “all kinds of redevelopment and gentrification” projects have been favored over “infrastructure needs and the people of the city.”

And he scoffs at the notion that there isn’t enough money to take care of those needs Toting up funds made available by “getting out of the school business,” eliminating automobile inspection stations and other city divisions, by drastically cutting down on police and fire employees; and by raising taxes, Williams says there ought to be as much as $100 million available for overlooked citizen needs.

That’s his message, anyhow, and it’s close enough to what Kenneth Whalum Jr. might be saying in one role or another that it’s likely to be heard several times over by one or the both of them between now and October 8.