One of the most stressful meetings in the history of Shelby County government took place Monday at a County Commission meeting that saw:

(a) an organized walkout by one side of a divisive argument over the county budget and tax rate, followed by
(b) a response by the other side to reconstitute itself as the full committee — all of this after
(c) a dire warning from the County Finance Officer that a failure to agree could lead to a shutdown of county government and a defaulting on employee paychecks.

In the end, after five hours of this sort of high-stakes poker, the Commission would approve a $1.1 billion budget package that assumed a status quo property tax rate at the current level of $4.37, though resistance from an organized Republican minority prevented an actual vote of approval on second reading;. The Commission would also vote for a generous distribution of surplus tax revenues that nullified the GOP minority’s lingering hopes for a one-cent reduction in the tax rate.

It was a party-line struggle — though each side included one prominent member of the other party — and it further intensified a division which has existed since the formation of a new Commission after the 2014 county election but which had been dormant until disagreements over budget policy flared it up again.

In a strict sense, there had been little doubt as to the outcome of the conflict, since the administration of County Mayor Mark Luttrell, himself a Republican, had used its influence in both public and private ways to put the brakes on sentiment for a tax decrease, which five Republican members had sought ever since Luttrell had made a point of announcing the fact of a $6 million end-of-fiscal-year surplus.

At a marathon budget-committee session last month, Luttrell had stated his opposition to using part of the surplus to reduce a penny on the tax rate, insisting both that county infrastructure needs and blight-eradication efforts should come first and arguing for larger increases to specific county divisions — the Sheriff’s Department being prominent among them — than the Commission as a whole had seemed willing to grant.

Subsequently, claim such proponents of the tax decrease as GOP members Heidi Shafer and Terry Roland, Luttrell bargained privately with Commission members and managed to wean Republican outlier Steve Basar back into line with the Commission’s Democratic majority, recreating the de facto alliance with the Democrats that Basar had pursued last fall in response to a GOP majority’s dashing his hopes of becoming Commission chairman when it tilted instead toward Democrat Justin Ford, the eventual winner.

During the same period, chairman Ford had been allied with the Commission Republicans, and he voted consistently with them again in each of Monday’s showdown votes, which centered on a seemingly nonstop series of procedural issues. Basar was aligned again with the Democrats, and indeed it was he who began Monday’s consideration of the budget with a recipe for distribution of budget increases that the Democrats backed and that administration CAO Harvey Kennedy conferred his imprimatur on.

Because two Republican members, Mark Billingsley and David Reaves, were away on vacation, the GOP resistance on Monday was reduced to the scale of a guerilla insurrection led by Roland and Shafer, but one that, when joined on a given vote by Republican George Chism and Ford, could prevent the absolute majority of 7 that was needed for certain key measures to succeed

Thus was the second reading of the administration-preferred $4.37 tax rate held one vote short of success, though it will be back up for a third and decisive reading on July 1, which coincidentally is the first day of the new fiscal 2015-16 year.

And the magic number was thereby denied on a series of other votes on budget-related items, since the Democratic coalition was also hampered early in the meeting by the absence of member Eddie Jones.

Jones’ arrival late in the meeting created the conditions for a decisive majority of 7 and prompted Democrat Van Turner to reintroduce a somewhat modified version of the budget proposal Basar had made, and that version would be approved — but only after a grueling procedural struggle that required two prolonged recesses, innumerable rulings by County Attorney Ross Dyer and staff, and a moment of genuine crisis.

That moment had come, just before Jones had made the scene, when the two sides were deadlocked over the Democratic coalition's effort to secure a budget vote and the GOP minority’s wish to opt instead for a continuing resolution that would allow current funding levels to continue. Another prospect for both sides was for a special called meeting sometime next week, but agreement on that, too, proved elusive.

It was then that CFO Mike Swift warned, on the basis of a Dyer ruling, that if the two sides could not agree, county government might well have to be shut down in early July and employee paychecks delayed or frozen.

Terry Roland argued for the Republican side that Dyer’s ruling was mistaken, that a continuing resolution could be achieved well after the beginning of the next fiscal year and that such late resolutions had occurred frequently in recent years.

Subsequently four members, Ford and Republicans Shafer Roland, and Chism, would absent themselves from their Commission seats, withdrawing to a back lounge area and thereby creating a temporary loss of quorum that could have aborted the meeting and put Swift’s warning to the test.

That was when Jones arrived, creating a new quorum, and the remaining members were in the process of re-forming the Commission, with Democrat Walter Bailey as the new chairman, when the four absentees returned. Not long thereafter, agreement would be reached on a budget, with the only holdouts being Shafer and Roland.

Seeming anarchy had been just around the bend, though, and it remains to be seen what will happen when the Commission meets on July 1 to consider a third and final vote on both tax rate and budget.

In other action, the Commission named Yolanda Kight from a field of several applicants to a vacancy on the county Judicial Commission. Kight prevailed after multiple ballots and see-saw voting by the Commission. 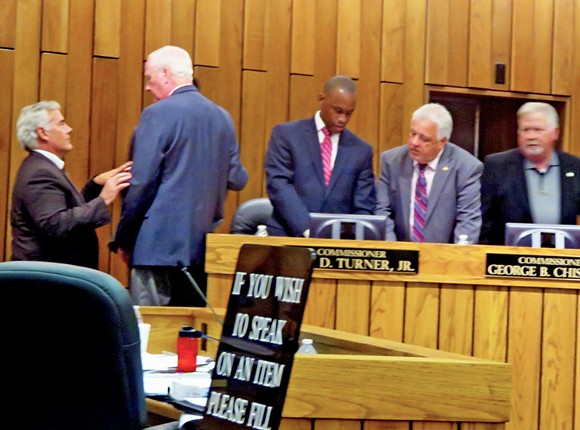