State Democratic chair Mary Mancini blasts GOP obstructionism at Raleigh event and calls for supporters of Haslam plan to “keep the pressure up.” 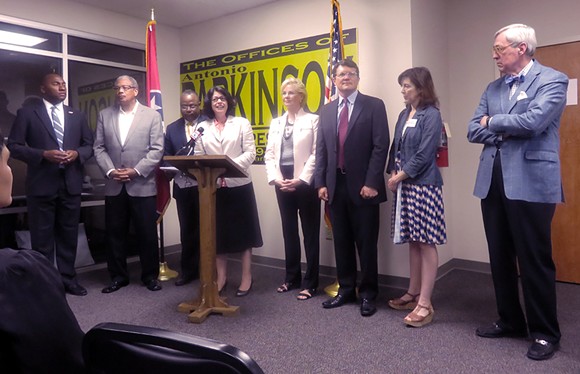 With what turned out to a providential act of timing — within an hour or two of Thursday’s latest Supreme Court decision upholding the Affordable Care Act — a group composed of state Democrats and local advocates of Governor Bill Haslam’s proposal for Medicaid expansion under the Act made a pitch in Raleigh for a new special legislative session to reconsider that proposal, Insure Tennessee.

The primary spokesperson for the group was state Democratic chair Mary Mancini of Nashville, and for obvious reasons her focus was on Democratic support for Insure Tennessee and partisan Republican attempts to obstruct it in a February special session of the legislature this year, as well as during the regular session itself.

Pointing out that Haslam, a Republican himself, had been unable to garner support for his plan from the members of his party, Mancini said she and her fellow Democrats had persistently called on the Governor “and the Republican leadership” to support another special session, “and they have refused.” She accused Republicans of “focusing on politics rather than providing what the majority of Tennesseans want.”

Alluding to revelations (not always welcomed by the legislators in question) that a significant number of Republican General Assembly members who acted to stonewall Insure Tennessee were beneficiaries of blue-ribbon health insurance plans provided by the state, Mancini asked, “And why are they more concerned with hiding access to their own affordable health-care plans they get than they are with helping other Tennesseans get the same access?”

Other members of the predominantly Democratic Party group of presenters made such other points as that as many as 220 Tennesseans might have died during the last year for lack of an affordable health-care plan and that other matters of importance included jobs and the survival of hospitals, many of which have been over-burdened with emergency-room care for indigent patients.

State Senator Sara Kyle was equally blunt. “Stop being selfish!” she said, as a message to those Republicans who had bottled up the Insure Tennessee resolution in committee. “It’s a moral issue,” she added.

State Senator Lee Harris, the Senate's Democratic leader, who had made a well-received appearance the evening before at a meeting of the Germantown Democrats, where he had addressed similar themes, made an effort to move the issue beyond pure partisanship.

Pointing out that polls show a clear majority of Tennesseans favoring Insure Tennessee, regardless of their party, Harris said the appeal for a new special session should by rights be directed to “a very narrow audience” of resisters, “a very small group of leaders on the other side of the aisle and extremists who have dominated the debate."

Harris absolved “rank and file Republicans,” reminding his hearers that the plan’s author, Governor Haslam, was also a Republican, and he added a hat-tip for John Roberts, the GOP-appointed Chief Justice who had voted with the majority on Thursday to uphold the ACA against a lawsuit, King v. Burwell, that challenged it on largely technical grounds.

Another effort to bridge the gap between Democrats and Republicans was made by Ed Roberson, the current director of Christ Community Health Centers, a onetime Democrat who has been a financial officer in several prominent Republican campaigns over the past couple of decades.

Identifying himself as a Republican, Roberson professed solidarity with the others on Insure Tennessee and called it “unacceptable” that Tennessee should rank 44th in the nation in health-care and that Memphis should have been called the “unhealthiest” city in the country in one nationwide survey.

Roberson’s participation provided at least a measure of ecumenism to Thursday’s press conference, as did his presence side-by-side with Ashley Coffield, local director of Planned Parenthood — an organization that has often been at odds with Roberson’s over their different attitudes toward legal abortion but which in many instances provides overlapping medical care.