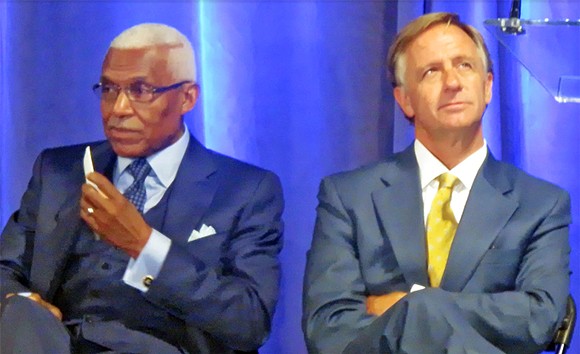 Governor Bill Haslam was in Memphis on Friday for the inauguration of a vast new Nike distribution center at the intersection of New Allen and Frayser-Raleigh Roads. Afterward he met with the local media and discussed important aspects of this news-filled week.

ON THE SUPREME COURT’S GAY MARRIAGE RULING. “i Just heard about it walking into the building. I’ve had no chance to review it. We intend to fully comply with the law and have instructed all departments to do so. The Attorney General will be communicating with all the counties and county clerks. As I understand it, he will them that, regardless of their personal feelings, they have a duty to comply.

ASKED WHETHER HE COULD PERFORM MARRIAGES: “As a civil servant, I can perform marriages, and I’ve done some But only with someone I’ve known for a long time. That’s not something I intend to be doing.”

ON POSSIBLE CONTROVERSY REGARDING THE GAY MARRIAGE DECISION: I think that one of the things that’s an issue in this country, that I think we have to learn to do a better job of, is talking about our deepest differences. There are people who have strongish feelings on both sides. My hope is that, as a country and as a state, we learn how to talk about those deepest differences, whether they be thoughts affected by our faith or not, that people have a chance to express that.

ON KING V. BURWELL AND CALLS FOR A NEW SPECIAL SESSION – I don’t know if a special session is the right idea. [The decision] obviously took one of the objections people have had off the table. I think there are still some other things people would have a question about, but we’re doing our best to address those.

I hope that [the decision] will affect [legislators], because, again, that was one of the things people stated. As you know, we had a restriction from the legislature about getting things in writing without their approval. We’re trying to address those things individually, the things that people brought up.

Another one is, can we get out of this if we decide we want to. Again, I think we have a Supreme Court ruling, an Attorney General ‘s decision, and a letter from HHS [Health and Human Servcices]that says that we can. I think our job is to try, one by one, to address those questions that legislators have that held them back.

Right now, it is not part of the plan to have a special session.

ON CALLS FOR REMOVING A BUST OF NATHAN BEDFORD FOREST FROM THE STATE CAPITOL: We honor a limited number of Tennesseans at the Capitol. I do not think that Nathan Bedford Forrest should be one of those. We honor six or seven people there, and it would be my vote to choose a different Tennessean.

ON WHETHER STATE LAW ON BATTLEFIELD MEMORIALS WOULD PROHIBIT MAYOR A C WHARTON'S PLAN FOR REMOVAL OF THE FORREST STATUE FROM HEALTH SCIENCES PARK (FORMERLY FORREST PARK) IN MEMPHIS:
“I thought that [law] just affected state property and not county [or city]. So that would not affect that.”