The descendant of one of the general's cavalrymen offers an arresting true-life tale -- and a surprising take on the controversy. 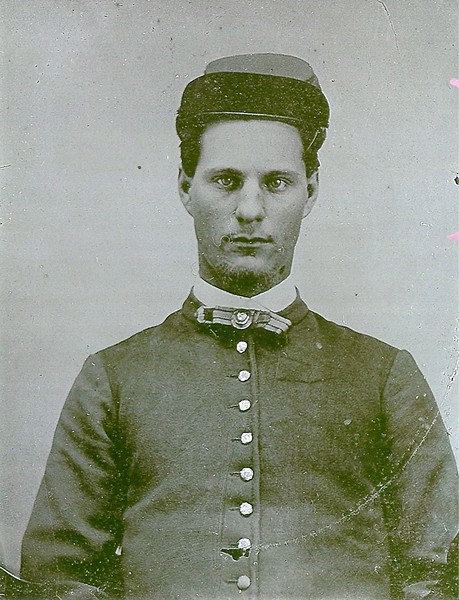 At a time when the image of Confederate General Nathan Bedford Forrest is shrouded in both mystery and controversy, and a debate rages as to whether the hero of yore should be considered a villain to be scorned, this remarkable account by a descendant of one of Forrest's calvarymen sheds light on both the man and his likely place in history.


William H. Terry was a young man of privilege from middle Tennessee when he signed up to join the Confederate Cavalry on October 30th 1861. He soon found himself part of an elite military unit of 40 well-mounted, well-heeled, and well-armed men, handpicked from some of the finest families of the region. After the raw recruits were initially drilled and trained at Carnton Plantation south of Franklin, they were assigned the designation of Company F, relocated to Camp Cheatham in Robertson County, and on December 11th, joined the 8th Battalion Tennessee Cavalry with Lieutenant Colonel James W. Starnes at their head.

The battalion was immediately attached to Major General William J. Hardee's Central Army of Kentucky headquartered at Bowling Green. Two weeks after establishing their base camp near Russellville Kentucky, orders came to confirm reports of Union troop movements in the vicinity of Rumsey and Calhoun on the Green River. On December 26th, Starnes headed north riding with Company F being led by Captain McLemore, and by the next afternoon was face to face with the enemy in the tiny hamlet of South Carrolton. After a brief skirmish, Starnes and his men sought refuge in the direction of Greenville, where they were treated by the local townsfolk to a belated Christmas dinner. It was there, on the morning of December 28th, less than two months after joining the war, that Private Terry met the soon to be infamous Lieutenant Colonel Nathan Bedford Forrest.

Forrest, headquartered in Hopkinsville, had also been ordered to reconnoiter in the direction of Rumsey. The command, now 300 strong, left Greenville headed north on the Rumsey Road (181), with an advance guard led by Captain Merriweather, Forrest with two companies of men at the head of the main column, Major Kelly with two companies in the center, and Starnes, having been assigned command of the final two companies, in the rear. Captain McLemore and his Company of Tennesseans provided the rear guard for the main force. When word came from the scouts that Union troops had been spotted just a few miles ahead, the pace of the well trained cavalry mounts hastened as word quickly spread through the ranks. Starnes and McLemore, frustrated by the pace of Kelly, surpassed the slower troops and soon found themselves with Merriweather and Forrest as part of a mostly unorganized band of compatriots eager for a fight.

During the initial engagement just south of Sacramento Kentucky, Starnes and McLemore - now in the thick of it - were ordered to flank left, while Kelly - whose men had come up after Forrest had briefly checked the general advance - ordered to flank right. Forrest himself shares what happened next (as recorded in his report of December 30th): "The men sprang to the charge with a shout, while the undergrowth so impeded the flankers that the enemy, broken by the charge and perceiving the movement on their flanks, broke in utter confusion, and, in spite of the efforts of a few officers, commenced a disorderly flight at full speed, in which the officers soon joined. We pressed closely on their rear, only getting an occasional shot, until we reached the village of Sacramento, when, the best mounted men of my companies coming up, there commenced a promiscuous saber slaughter of their rear, which was continued at almost full speed for 2 miles beyond the village, leaving their bleeding and wounded strewn along the whole route. At this point { Union} Captain Bacon, and but a little before Captain Burges, were run through with saber thrusts, and Captain Davis thrown from his horse and surrendered as my prisoner, his shoulder being dislocated by the fall. The enemy, without officers, threw down their arms and depended alone upon the speed of their horses."

The only mention that Forrest makes of Private Terry in his report is to count him by name among the day's losses. However, General Thomas Jordan, in his 1868 book The Campaigns of Lieut.-Gen. N.B. Forrest, which was compiled from Forrest’s personal journals and correspondence, writes: "Private W.H. Terry, of Lieutenant-Colonel Starnes's detachment, riding with his commanding officer { Forrest}, after conspicuous gallantry, while engaged single-handed with a Federal trooper whom he was hammering with his exhausted rifle, was run through the heart by Captain Davis; and thus fell one of the most daring members of the command." It was H. Gerald Starnes, in writing of his ancestor's contribution to the Confederate cause, who describes Private Terry as "spurring his horse to Forrest's side", as the Lieutenant Colonel was fighting off a coordinated attack. It was immediately after killing Terry that Captain Davis – who had in fact been thrusting for Forrest - was thrown from his horse and captured. One can only speculate how the sword that sent Terry to his Maker could have changed the course of history had Davis remained unencumbered, in what history as we know it marks as Forrest’s first cavalry engagement.

Alexander Great Terry, the now fatherless infant son of Private Terry, would grow to become my mother's, biological father's, father. As a Southern White male, whose roots in this country run as deep as those of the country itself, I neither feel undeservedly proud nor unjustly ashamed of my heritage, I simply try to understand it. I am, however, compelled to offer a few words of reason as regards the recent affront to all things Confederate.

It is unfortunate that we live in a world of ignorance and hate. It is unfortunate that there are those among us who pick and choose fragments of history out of context, to twist and manipulate to fit their own means. The world as we know it is the end result of everything that has ever happened throughout the entire course of human history, not just those few events we were forced to memorize in high school. If we have any hope of continuing to advance as a people, we must learn to learn from out past mistakes, not through vitriol and self-righteousness, but through understanding. And we must accept when it is time to move on.

Nathan Bedford Forrest was one of the most effective leaders on either side of the Civil War. It was only right that Memphis of a century ago should want to honor her adopted son. But that Memphis no longer exists. We have to accept that Forrest Park is a thorn in the side of a large percentage of our population, black and white. Just as Charleston is evolving to deal with a flag that had been twisted into a symbol of hate, so too must we deal with this. It is time to return the General and his wife to Elmwood where they were initially interred. And the statue, which is considered one of the finest equestrian public park statues in the country, should go with them. And if there’s no room in their old family plot, they’re welcome to mine.

Aaron James is a retired architect turned writer and historian from Memphis, who has spent the past two and a half years researching his family for his soon to be self-published book entitled “America: A Family Perspective.” You can follow his progress and latest findings on the book's Facebook page at: www.facebook.com/AmericaAFamilyPerspective.