Rubio, Trump Get Some Local Boosting 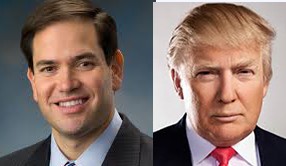 The contest for the 2016 Republican nomination for president is prompting people down our way to choose sides.

Former Chattanooga-based congressman Zach Wamp, who ran a strong GOP primary race for Governor in 2010, will be at Owen Brennan’s Restaurant on Poplar Avenue at 6 p.m. Monday to announce plans for the Tennessee campaign of Florida U.S. Senator Marco Rubio.

And Memphis-area Tea Party leader and broadcaster Mark Skoda has come forth as an enthusiastic supporter of mega-entrepreneur Donald Trump, who continues to be the poll leader among Republican aspirants.

You can be sure that more news of this sort, about this or that contender, will be coming in advance of Tennessee’s presidential-primary date on March 1, 2016, “Super Tuesday.”