Flyer Exclusive: Wharton Explains His Actions on the Lipscomb Matter

“It hit me right between the eyes like a two-by-four,” says the Mayor, who cites as his reasons for acting without delay the negative fallout at Penn State and in the Catholic Church after inaction on similar scandals. 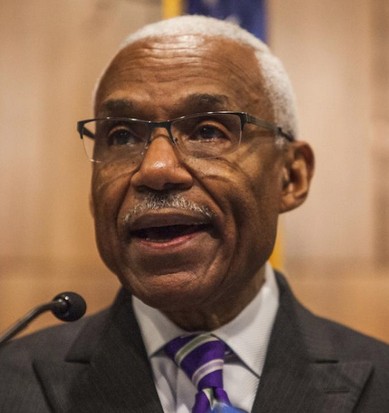 The ongoing crisis involving former, now defrocked, city planning czar Robert Lipscomb seemed to come out of nowhere just as Mayor A C Wharton had entered the stretch drive of his current reelection campaign and on the brink, too, of action — locally, statewide, and elsewhere — affecting the future of the Fairgrounds TDZ project and other ongoing development projects.

In an effort to assess some of the fallout of the Lipscomb matter and to piece together just how this bombshell came to explode when it did, I talked to the Mayor in the aftermath of a breakfast reception for him at the Crescent Club on Wednesday morning

The following is a transcript of his answers to several questions I put to him and which he answered with an air of forthcomingness.

I asked what the.effect of Lipscomb’s abrupt fall from grace — a suspension followed by a firing — would be on the ongoing city projects:

Mayor: “Listen, it would be probably the height of arrogance to say ‘Aw, this won’t affect anything,’ Any time you change characters, the chemistry changes, but in terms of whether we get it done or not, I’m not concerned about that. As a matter of fact, we spent most of the day yesterday talking to experts. We just had a parade of people. You’d be surprised at the individuals from finance and real estate saying. “Hey, We’re going to pitch in. We’ll be there. Let’s get on the team. All this means too much to the city. Folks just coming out of the woodwork without having to call them, saying, we’re here for you. These are not people saying, ‘if you hire me, if you retain me, I’ll come in.’ So we’ll have the Whitehaven meeting as scheduled. We’ll have the conference on poverty tomorrow. So the world goes on. Indeed, it’s a loss. and I mean both on the personal side and the professional side.”

I asked if the new people freshly appointed to fill Lipscomb’s day-to-day jobs were temporary or permanent replacements.

The Mayor was asked to explain what appeared to be an unusual suddenness to his actions involving Lipscomb.


Mayor: “I had no allegation at any time prior to that. I guess knowing what I know as an attorney, having handled employment cases, having taught employment law for 25 years at Ole Miss, it never occurred to me, not even in the slightest, to pursue any other course. We had an allegation, and the allegation came directly to me. It hit me right in the face. I couldn’t say, ‘What did you say?’ It hit me. I mean, a lot of the time a president of a company will say, ‘Well, there was something I heard,' but it hadn’t got to me yet. It hit me right between the eyes like a two-by-four."

But, in the absence of investigation or legal action, given that the man was a stranger calling from Seattle with an allegation, why act at all, the Mayor was asked. Would he, for example, have acted similarly if somebody telephoned an accusation from, say, Boston, about so-and-so (an employee with a pure-as-rain reputation)?

Mayor: “Uh, I failed to include a critical detail. The report came in, it got to me on Thursday. I had talked to Director Armstrong. I didn’t want to communicate over the telephone, so we have a way of communicating by saying, ‘I need some face time.’ And he said, ‘Well, Mayor, we’re at the radio station, Clear Channel, tomorrow morning. Let’s find a place where we can talk.'  So we found a secure place, sat down. I said, 'Now, Toney, this is a police matter. This man is alleging a crime. How do we handle it?’ I said, ‘Do I call him back?’ He said, ‘Mayor, you’ve got to call him back.’ And I said, ‘Good,’ and he said, ‘But you can’t do it by yourself. I’ll come by your office and we’ll call him together.’

“We picked up the phone and called him. I turned to someone who’s a professional. He said, ‘Mayor, we gotta go;. We’ve got to check this out.’ So it wasn’t A C wanting...here’s a man who’s a top law enforcement officer who says, ‘This is about a crime that occurred in Memphis, Tennessee.’ I had reached the same conclusion, but, again, I’m not a trained investigator, and when he listened to it, and it was a lengthy conversation…. and actually, while we were talking, I think Toney was checking out some things. And, uh, he said, ‘Mayor, we’ve got to go.’ So, anyhow, this was not A C Wharton Expert,’ but when you’re talking to a law enforcement official…”

A meaningful pause here, which was filled by my question as to what the individual in Seattle was threatening to do.

Mayor: “Keep in mind the report reached me by telephone Thursday evening [August 21]. I then talked to Director Armstrong that Friday….The report that went to the telephone desk did contain some fairly specific information. I will not get into what he wanted. That’s part of the investigation. But, even had he not wanted anything done, I had a legal responsibility to check him out. Now, I will talk as a lawyer. The liability that the city could have been exposed to, if, after I had received that information, something else happened, even if it was two days later, imagine the consequences of that! And you don’t have to be a lawyer: If you look at Penn State, everybody to this day is probably saying, ‘Why didn’t we check that out? Why didn’t we check that out?’
“And the Catholic Church, their dioceses all around had this huge judgments, and I’m sure people are saying, you know, it seems kind of weird that we didn’t check that out. I’m not going to be in that situation. And that’s where we were."

Wharton would not comment on persistent rumors over the years, familiar to media people and City Hall employees alike, that Lipscomb pursued a gay lifestyle, but he was firm that, prior to the fateful conversation of Thursday, August 21, he had no information regarding any improper behavior on Lipscomb’s part.

“Absolutely not,” the Mayor said. And no knowledge of what has since surfaced as a complaint filed against Lipscomb in 2010 by the individual now living in Seattle?


“Absolutely not,” the Mayor repeated.