Charges fly fast and furious — about Lipscomb, "gloom and doom," and running with your tail between your legs. 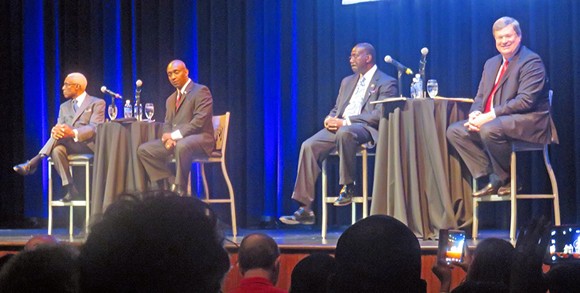 For those who (like this scribe) skipped Tuesday night’s scheduled mayoral debate at the University of Memphis’ Rose Theatre, for whatever reason, it turned out to be anything but an iteration of the same old same-old.

Here’s a report from an attendee:

A crowd of about 200 people, many of them students, convened in the University of Memphis Rose theater Tuesday night for yet another mayoral debate. Billed as the "millennial debate," this one featured two students taking turns asking a prepared question.

Themes during the debate included crime, jobs, economic development, etc., coupled with some youth-focused questions on education, technology, the involvement of youth in government, attracting youths to come to — and stay in —Memphis to live, etc.

On safety, Wharton toted a recent report from the Shelby County Crime Commission stating that crime, including violent crime, was down about 5 percent for the first six months of this year compared to the comparable time last year.

Strickland was aware of this statistic, and dismissed it, reemphasizing that the long-term statistics continue to show that violent crime was up significantly since the year that Wharton first took over as mayor of Memphis, and that during that period of Wharton's incumbency, Memphis went from the fifth-most violent US city to the third-most violent US city.

But perhaps the most striking and novel development in this debate was two-fold: a sharp exchange about the ongoing Robert Lipscomb scandal, and a series of barbed charges throughout the debate during which the challengers attacked Wharton for dodging responsibility, and Wharton responded in kind.

The Lipscomb affair came up in a question. Strickland said that the administration should have acted more aggressively in 2010 when the charges were first brought up. It should've been brought to the Mayor’s attention. If it wasn't, then the person responsible for that should've been held accountable.

Strickland also said that while Wharton acted appropriately in the first day or two, after that the administration kept commenting on the investigation, adding up the number of accusers, etc., which he said was wrong. Collins was even more fiery in his defense of Lipscomb, whom he called someone that has spent "half his life building up the beautiful Memphis skyline."

He noted that no formal charges have been brought against Lipscomb, and assailed the administration for what he called "character assassination."

In another sharp exchange, Wharton criticized the others on stage for their "doom and gloom comments.” He said "Hold yourself accountable!" And "To thine own self be true." He claimed that council members deliberately dodged a vote on some of his benefit cuts, claiming that the administration could act without council action. "Ask them to deny it, "Wharton said of the two council members on stage.

Again, Collins was even more severe, responding that Wharton "tucks his tail between his legs and runs" from responsibility.