All other Council runoff elections go easily for first-round leaders. 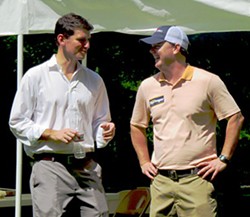 The Memphis city election of 2015 came to an end Thursday night with what vote totals showed were four comfortable wins for first-round leaders and one barn-burner in City Council District 5, (Midtown/East Memphis), where well-financed newcomer Worth Morgan edged out activist Dan Springer in a battle of youthful Republicans.

Other races lagged behind that one in both turnout and drama.

With all 19 precincts reported in the District 2 runoff (Southeast Memphis) Frank Covett Jr. defeated Rachel Knox by 2353 votes to 833.

With 15 of 17 precincts reported, Patrice Robinson had a seemingly insurmountable lead over Keith Williams in Disrict 4 (Whitehaven), 1043 to 705.

With all but one of 18 precincts counted, Jamita Swearengen was easily beating Doris DeBerry-Bradshaw in District 3 (South Memphis)_, 1086-328.

And, in District 7 (Frayser/North Memphis), with all 18 precincts reported, interim incumbent Berlin Boyd held on to his lead by a vote of 1196 to Anthony Anderson’s 709.

Note: Until final certificaton by the Election Commission, all vote totals are unofficial.