Hillary Has Her Memphis Moment, Promises to Turn Tennessee Blue

Presidential candidate Clinton gives an enthusiastic crowd at LeMoyne-Owen lots of what it came for. 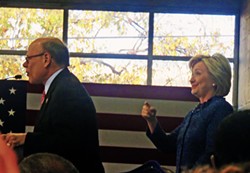 There was a lot of excitement at the Bruce-Johnson Hall on the campus of LeMoyne-Owen College Friday. It is not every day, after all, that a leading candidate for President of the United States comes to visit, and the visitor was no less than Hillary Clinton, the former First Lady of both neighbor-state Arkansas and the whole of the United States, a former Senator from New York, a former Secretary of State, and very possibly the leading candidate for President.

That was the main reason for the excitement, of course. The dawning of an election year is only a little more than a month away, and the Iowa caucuses, closely followed by make-or-break primaries in New Hampshire and South Carolina, come a very few weeks later.

That was enough, all by itself, to fill up the sprawling gymnasium space with a few hundred bodies. A little bumper music, some artful stage-dancing, and a room-filling chant or two surely didn’t hurt.

While the crowd waited for Hillary, state Representative Raumesh Akbari took the stage for a more than adequate pep talk. Akbari asked those present to get out their smartphones and text the word “rally” to number 47246. That was “for a chance to win a signed Hillary Clinton poster,” she said (and for the certainty of having one’s phone wind up on a contact list, though Akbari didn’t spell that out).

The young legislator briefly reviewed several of Clinton’s achievements in public life, the most unique of which came with a bit of street cred: “She arranged a cease fire between Hamas and Israel Nobody else could do that. She’s a bad sister!”

After Akbari came Clinton herself, accompanied to the stage by 9th District congressman Steve Cohen, who kept the buzz going with his introduction: “I can feel some magic in this room, with all these Democratic faces,” who reviewed Clinton’s resume all over again, adding, “There’s not a more prepared person to be President of the United States not only this year but maybe ever! She can stand up to anybody out there, even Donald Trump.”

Cohen recalled the last time he had introduced Clinton at LeMoyne-Owen, “some 23 years ago,” in 1992, when he was a state senator and she was campaigning for husband Bill to become President.

When it came her turn, Hillary turned the clock back, too, expressing ride in “the job my husband did,” in the “23 million new jobs” created in his administration, in the “balanced budget and the surplus” he achieved. “The economy does better with a Democratic president,” she said, going on to contrast those days with the “9 million of lost jobs” and millions of lost homes of the most recent Republican administration.

It was vintage FDR/”Happy Days are Here Again”/New Deal talk, contrasted with remorse at the “trickle-down” Republicans, with their absorption with “tax cuts for the wealthy,” and “a deal stacked for those at the top.”

About that time, somebody fainted out in the crowd, and Clinton, after asking someone to “give them some water” with a fair amount of urgency, concluded, “The talk of Republicans might have done it.”

Candidate Clinton did not neglect the talking points of the present, either — raising the minimum wage, (“because no one in American who’s fully employed should be in poverty”); renewable energy; equal pay for equal work for women; early childhood education; criminal justice reform; help for small business; a New College Compact (“so that student do not have to borrow money to pay tuition.”

All in all, she was promising “fairness and justice and opportunity” for everybody, and, despite her expressions of disdain for Republicans, she pledged to work across the aisle. There were harsh words for the “gun lobby” and a pledge to defeat the terrorists of today’s world, with their “murder and hate and viciousness.”

A credible performance, though skeptics might consider much of what Clinton had said to be familiar boilerplate.

There was, however, one distinctive pledge, clearly meant to be reinforced by her Friday appearances in Memphis and Nashville (where she went for another rally later on): “I’m going to campaign in Tennessee and try to turn it blue!”

Really? Red-state Tennessee of the GOP legislative super-majorities? It was like Babe Ruth pointing his bat to center field at Wrigley Field in the '32 Series and then preparing to hit one out. If she can do that….

Not sure what Crystal Gayle’s politics are, but there’s a campaign song there somewhere.