But was this one, keynoted by Rep. Steve Cohen but sans Jim Strickland, the city's new mayor, the finale? 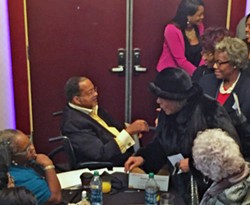 Although there were some early fits and starts, as is the case with most politicians, the political career of Myron Lowery began, more or less, in 1991 — the same year as the epochal election of Willie Herenton as Memphis’ first black elected mayor. And it would seem to have ended on Friday, January 1, 2016, when the Super District 8, Position 3 City Council seat Lowery decided not to pursue again in last year’s city election was filled with the swearing-in of Martavius Jones.

That’s 24 consecutive years, a considerable run and a record for an African-American official in Memphis, and if son Mickell Lowery had prevailed, as expected, in his election contest with underdog Jones, a former School Board member, the seat might have remained in the family for yet another generation.

The senior Lowery had to have had that prospect in mind a year ago, when in his 24th consecutive “Myron Lowery Prayer Breakfast,” he looked on as son Mickell moderated the festivities at the airport Holiday Inn in his stead. Lowery’s first prayer breakfast had been held on January 1, 1992, the day that both he and Herenton, the guest of honor at the breakfast, had been sworn in.

On that first occasion (held at The Peabody), as on the 24th, the breakfast — a fundraiser whose proceeds would be shared out with various deserving local causes as the event evolved — attracted an overflow crowd of politically influential guests. Except for a brief spell, a decade or so back, when Herenton began holding his own New Year’s prayer breakfast, more or less in competition, the Lowery breakfast always had the city’s mayor — first Herenton and then A C Wharton —on hand, along with most other local politicians of any consequence.

The breakfast became, as they say, a tradition, often a news-making one, depending on the candor and intensity of the speeches by political figures, which were interspersed with musical selections from local choirs and celebrated church singers and with, well, prayers.

It was a tradition that could have been expected to continue for a while except for that hitch in the outcome of the 2015 election. Not only was Mickell Lowery, the projected host of future breakfasts, upset in his Council race, but his father had rolled the dice and lost in his support of the reelection of then incumbent Mayor A C Wharton.

It wasn’t just that Councilman Lowery had backed the loser in the mayoral race. He had done so in the most conspicuous — and, to eventual mayoral winner Jim Strickland, most offensive — way possible. At last year’s breakfast, Lowery had asked Strickland, his longtime Council mate, to stand, and, after beginning with praise of Strickland, then not only proceeded to confer his public endorsement on Wharton (whom Lowery himself had opposed in the special election of 2009) but basically called out Strickland, at some length, for what Lowery deemed a premature challenge.

Rather than stand and continue to listen as Lowery went on with remarks that may not have been intended as patronizing but certainly sounded that way, Strickland walked out of the room.

He wasn’t there for Friday’s breakfast, although, in a preliminary mailing sent out to advertise this year’s prayer breakfast, Lowery had mentioned Strickland as one of the dignitaries invited to speak. Such speaking as Strickland had in mind to do was apparently reserved for the new mayor’s own inauguration address later that morning at the Cannon Center.

Strickland’s counterpart, Shelby County Mayor Mark Luttrell, was there Friday and spoke to a crowd that was still respectably sized, if obviously diminished from previous years. So was 9th District Congressman Steve Cohen, the featured speaker, who — as he usually does — provided a few verbal sparks.

Cohen’s most newsworthy statement may have been his blast at the Shelby County grand jury that recently failed to return an indictment in the shooting death, at the hands of a Memphis police officer, of a black youth, Darrius Stewart. After ter

ming the grand jury’s inaction “a mystery’ and wondering out loud why no indictment was returned, Cohen said, “Police need to think twice before taking lives” and dilated on a reform bill he is sponsoring which calls for federal funding to investigate such cases and for handling them in jurisdictions other than the one in which they occur.

The congressman used the formula “3 C’s” to describe leading items on his wish list for the new session. Spelling them out, they were: “commutations,” which he wants to see more of from the federal government, especially in relation to drug convictions; “cannabis,” an increase in the liberalization of marijuana laws; and “Cuba,” the further flowering of the relationship, recently opened up by President Obama, between the United States and the island nation to our south.

Much of Cohen’s speech was given over to the theme of greater bi-partisan collaboration in Congress. He stressed the need for “collegiality and respect for [one’s] colleagues” and said that he himself was “getting better all the time” with regard to both “tools and relationships.”

On the national scene, Democrat Cohen stopped just short of congratulating the Republicans for their choice of Paul Ryan as House Speaker. On the local scene, he thanked Mayor Luttrell for being a partner in government and, while anticipating a good relationship with Mayor Strickland, made a point of expressing his appreciation for former Mayor Wharton, another absentee on Friday.

Mickell Lowery had opened up things Friday with a suggestion that the annual prayer breakfast might be continued, though in a scaled-down form. His father, when it came time to make final remarks, made a tentative effort at calling the roll of elected officials who were present, only to let that effort tail off when he realized that most of the Shelby County Commissioners, the group he started with, had already left the scene.

As for the future of the prayer breakfast, former Councilman Lowery put the question to those audience members who remained. “Should it be continued?” he asked. Most of those remaining applauded, in degrees ranging from the polite and perfunctory to the enthusiastic.

Presumably, we’ll find out next year.