The Republican and Democratic presidential candidates are all banging away at their own personal ceilings — and at their opponents —as Judgment Day in New Hampshire approaches. 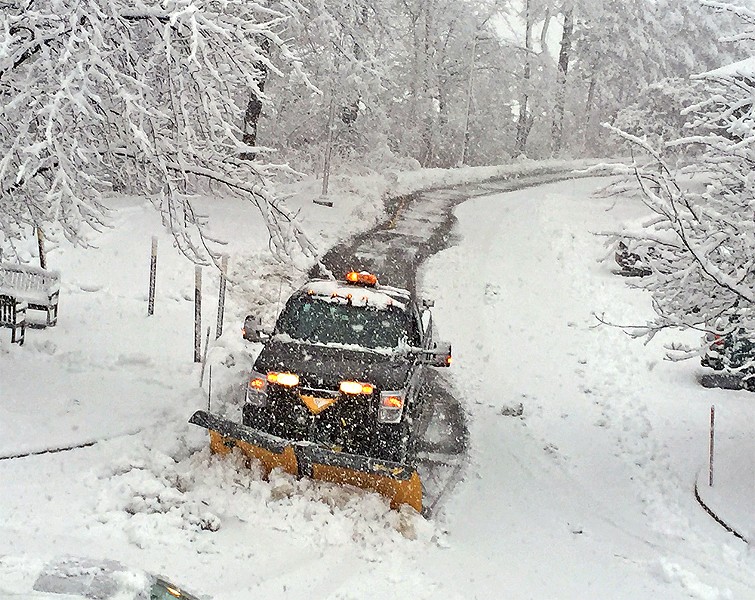 Yes, before it’s all over on Tuesday night, Donald J. Trump will no doubt play a significant character role in my soon-to-be-published chronicle of the New Hampshire primary (scheduled for the Flyer issue of February 18), just as he has in so much national media coverage of the presidential-election season to date.

I plan to check out his last major rally in Manchester on Monday night, primary eve, and that should allow me to hazard some sort of serious eyewitness take on The Donald. 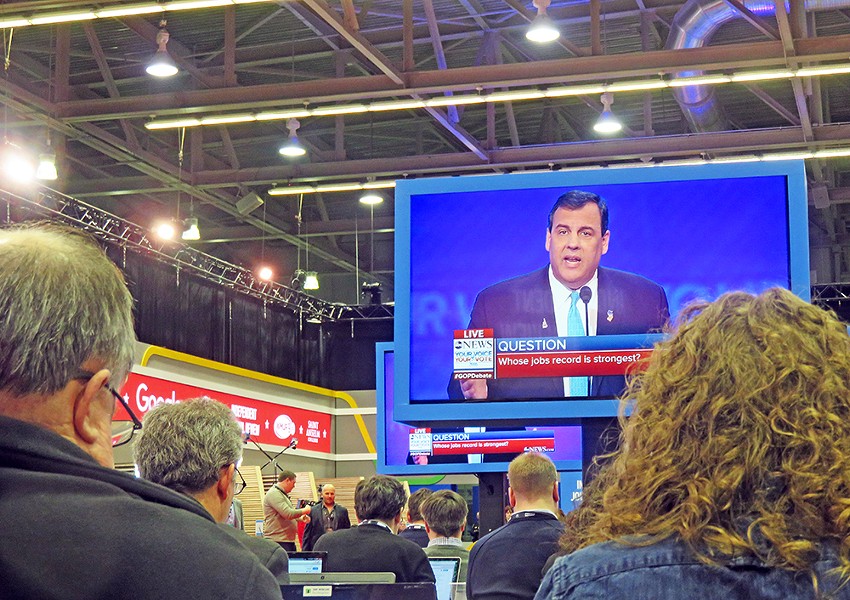 But for all the polls that still have Trump way ahead of his GOP rivals — by something like 20 points, at last reckoning — I wouldn’t be surprised if he ends up suffering another major embarrassment like that which befell him in his second-place finish to Ted Cruz in Iowa last week.

So far I’ve only seen him in action in Saturday night’s debate of the remaining Republican contenders in Bedford, and, in all honesty, it was difficult to see Trump as a major figure in that event, or , for that matter, retrospectively over the course of the debates and cattle-call forums to date. More about that in the aforesaid February 18 issue.

Front-runner Trump may still be (at least in New Hampshire and possibly, tenuously elsewhere), but, up until Saturday night’s debate, I thought there was a fair chance of his being overtaken in New Hampshire by Florida Senator Marco Rubio, who entered this last week of the primary on a roll, after finishing third in the Iowa caucuses and coming close there to catching Trump for the silver. 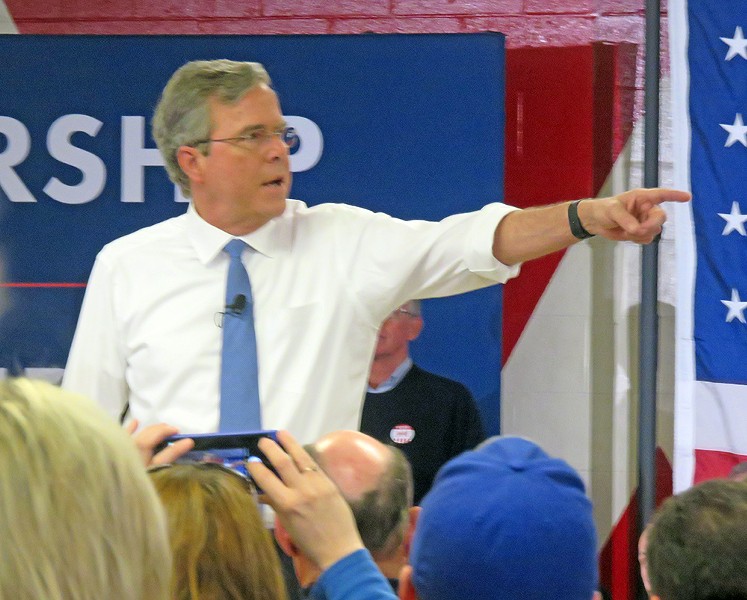 But that was before Rubio and New Jersey Governor Chris Christie did their impromptu version, at the weekend debate, of a well-known Washington Irving short story, the one in which schoolmaster Ichabod Crane has been dazzling everybody as a fine young dandy until village bully Brom Bones, played in this case by Chris Christie, runs him right off the reservation.

Maybe that’s overstated as a comparison to the verbal pummeling Christie, obviously desperate to keep his own diminishing hopes as a suitor alive, gave to Rubio on the score of the latter’s talking points, rote-sounding to the point of self-parody, but it was pretty brutal. A thought: anybody who went to high school in New Jersey with Christie and fancied the same girl that he did was ipso facto risking a serious ass-kicking.

But there was a serious point to the mayhem, which Christie duly made. And that was that the GOP field’s three governors — Christie, John Kasich of Ohio, and Jeb Bush of Florida — were all seasoned in actual administration rather than in the kind of parliamentary fencing that both Rubio and Cruz were skillful at. 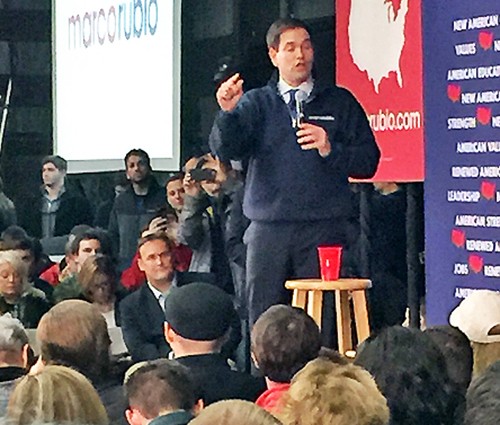 It remains to be seen, in fact, whether New Hampshire becomes a turning point in how actual voters see the matter. Up to now the gubernatorial types have been puffing hard trying to stay within hailing distance, not only of the two  clever young Senators, but also of such untutored originals as Trump and Dr.Ben Carson.

Kasich inevitably talks a good civics-class game in public, and, after attending a Bush town hall on Sunday morning, I found myself more impressed with his comprehensiveness than I had expected to be (hey, he even acknowledged the reality of man-made climate change, albeit somewhat left-handedly in response to an attendee’s question).

The guvs are running out of time, however, and should probably all step it up, a la Christie. It should be said that Bush’s SuperPac, Right to Rise, has been running expensive and vigorous ad campaigns against Rubio and anyone else perceived as standing between Bush and the voters he wants —but who so far haven’t wanted him.

Now, this one’s a real doozy — a bona fide one-on-one contest between a crafty and experienced pragmatist, Hillary Clinton, and an inspiring ideologue…nay, a revolutionary, Bernie Sanders. There is little 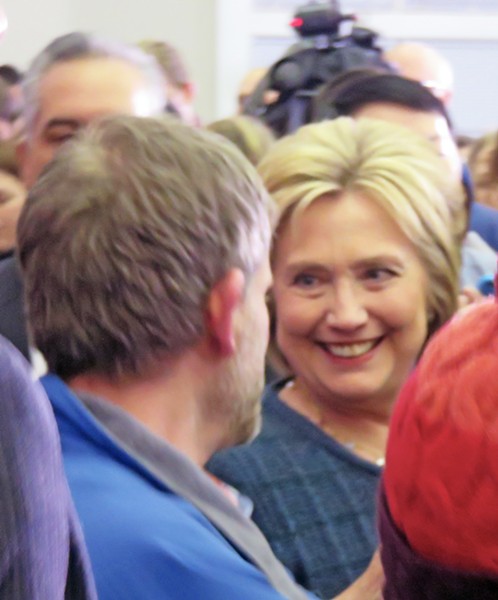 doubt that New Hampshire is Bernie’s, but real (if somewhat diminishing) doubt that the energies he has tapped are enough to be a concern to Hillary elsewhere as the primary season wears on.

The Democrats should really take heart that they have two candidates with significant followings, and that Thursday night’s debate between the two of them, beginning with such blazing dissonance, should have ended on a note of genuine mutual respect.

When I saw Bernie at a rally at Great Bay Community College at Portsmouth on Sunday, it was precisely what I expected — an overflow crowd not only composed of today’s youth (lots of them) but one significantly leavened by graying ex-hippies from another time.

Pundits keep comparing Vermont Senator Sanders to the charismatic Obama of 2008 or even, in his populist appeal, to Trump. But he is neither an inspiring New Thing like the former nor an exciting celebrity scofflaw like the latter. He is a bona fide revolutionary with

a program that is authentically Socialist — free college, state-supported medical care for everybody, guaranteed living wage for all workers, sticking it to the too-big-to-fail corporations.

A program of reform that attacks economic inequality directly and isn’t, like so much liberalism of the present, siphoned off into purely social issues, a la what Marcuse called repressive desublimation. (Although Bernie endorses the social issues, too.)

Still, Hillary’s IOUs and a skill-set that shines through in extended give-and-take sessions like one I witnessed at New England College in Henniker are built for the long haul. We’ll see.

Like Iowans, the residents of New Hampshire understand their importance in the quadrennial screening process for would-be American presidents — a task which culminates in mid-winter — and they are downright intrepid in dealing with the elements.

Take the massive turn-out for right-wing poster boy Cruz in Salem on Friday night — a moonless sub-freezing night with iced-over streets and several feet of freshly fallen snow for the town’s fleet of snowplows to contend against. Parking at this and all other events was hard to come by.

Monday is everybody’s last shot at making good here, and some of the Republicans may not go any further. More about that later. And, btw, this visit to the New Hampshire primary is my seventh rodeo (1992 was my first.) It never gets old.