"At Least One Republican Knows What He's Talking About"

Flyer publisher, in guest commentary, looks past the circus of the latest GOP debate and puts in a word for contender John Kasich. 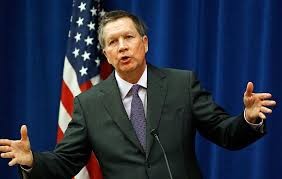 Last night's Republican Presidential debate was remarkable in that the CNN "moderators" did significantly less moderating than the kindly referee who "officiated" my 7-year-old grandson's basketball game last Saturday (IC vs St. Louis), in which dribbling was considered optional, fouls were basically non-existent, and the small boys (whose equally small hands could only occasionally hold the basketball) ran around like chickens with their heads cut off. My grandson is certainly not the next Kobe Bryant (who played his last Memphis game here Wednesday night), but Ben had great fun running up and down the court, to no obvious purpose.

It occurred to me last night that this was exactly what the Republican Presidential Debate in Houston was all about. There was no kindly referee who recognized the participants' flaws, no method in the madness. To mix metaphors shamelessly, it was all sound and fury signifying nothing.

The worst part was that the misguided morons running this CNN "debate" utterly ignored Dr. Ben Carson and

Gov. John Kasich. I confess that I have not been watching this particular circus closely over the past six (or is it nine?) ridiculous months. But now I'm paying attention; it is after all the actual year of the election. So why in the world would you have a debate with five candidates without carving five relatively equal chunks of time for each of them to speak?

In Carson's case, his getting less face time was probably both an act of kindness and a relief to the candidate himself. To me, Dr. Carson always looks like he's smoked a joint or two before the event to settle his nerves. I am not suggesting for a moment that the Doctor is a Dead Head. But one can have much bigger character flaws than that habit, a fact which all but one of the other "candidates" certainly demonstrate on a daily basis, and reaffirmed, big-time, last night, over two excruciating hours.

The one exception was/is Governor Kasich, an "establishment" guy to be sure, but one who last night, on the rare occasions he got to speak, seemed to know what he was talking about, to have experience doing what he talks about, and to have the sense to talk about the things he's going to do, all of which in this 2016 Republican race passes for uncommon brilliance. But like Rodney Dangerfield, Kasich gets no respect. None whatsoever, none from Wolf Blitzer, and even less from the pea-brains who surround him.

Nevertheless, Kasich persevered last night when he could, at one point even jumping on a question that Blitzer had just handed on a plate to King Trump. As a noble royal should, the Donald quietly sat back and let the Ohio Governor speak his piece without interruption and nary a snide remark. Note that Kasich is the only one Trump never trashes, not out of politeness, of course, and not entirely because (at this point and maybe forever) Kasich is a single-digit non-factor. No, at least part of Trump's civility towards the Ohio governor is this: the Donald's real enemy (and he knows it) is logic. He knows he can fool all of the people some of the time; he can fool some of the people all of the time, but he can't fool all of the people all of the time.

Those are Abraham Lincoln's words, of course, not mine, but they seem appropriate re. Donald Trump. He knows he's in a race against time, he's in a way better position than anyone else, and his superb jungle instinct tells him not to mess with that weird critter over there in the corner, the one who might blow his cover, until/unless it's necessary. Fear of the unknown still retains a place in the jungle hierarchy, even at the best of times for predators.

Obviously, none of this does Kasich any good at the moment. But for the record, tonight at 5:30 p.m., you'll find me at the Holiday Inn University on Central, where, yes, the Governor is appearing. Not sure if you need a reservation, but i kind of doubt the lines will be out into the street. There will be lines for certain in Millington Saturday night, where the Sweet Prince of New York City will be appearing. And that will be a real occasion.

So, I suspect, will be Kasich's event this evening, on a decidedly more modest scale. I'll listen tomorrow evening with relief to a Republican candidate presenting intelligent discourse on the issues, not all of which, of course, i will remotely agree with. But this will sure beat another night screaming at Wolf Blitzer on the television screen.

And if i possibly can, tonight I am going to shake Governor's Kasich's hand, and tell him (as a lifelong Democrat who's unlikely to vote for him in November) that I came to the Holiday Inn just to listen to him for longer than 3.45 minutes. And, selfishly, I also want to be able to tell my great-grandchildren that once I had the pleasure of meeting perhaps the last sentient being ever to run for the Republican Presidential nomination.