Candidates close out a weekend rush here of presidential hopefuls on the eve of Super Tuesday primary voting.

No doubt mindful of the importance on Tuesday of the African-American vote, so central to her landslide victory in South Carolina on Saturday. Clinton dropped in on at least two predominantly black churches — Mississippi Boulevard Christian Church and Great Imani Church — on her way to a noontime address at Meharry Medical College in Nashville, an historic African-American institution.

Her brief address at Mississippi Boulevard constituted a virtual mini-sermon on the importance of Americans “working together” to solve problems across racial lines. At times conflating that theme with stern words about “the gun lobby,” she recapitulated numerous recent occasions in which African Americans were victims, including the violent deaths of Trayvon Martin, Erick Garner, and the elderly members of a South Carolina bible study class.

Her ultimate message was upbeat, as she called for the rejection of “prejudice and paranoia,” and ventured that America’s “best days” were still ahead. 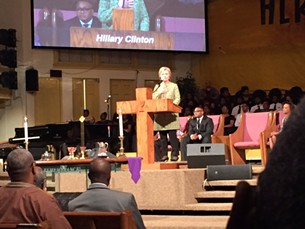 Carson, who had also apparently visited some early church services in Memphis, made a late-morning stop at Alpha Omega Veterans Services, Inc., a privately run facility in the Airport area that function s on behalf of returned veterans. Carson evoked D-Day during World War Two and other memorable battles in which American servicemen took horrendous losses but “didn’t turn back,” and said America owed its veterans a return favor./X

In particular, Carson, mindful of various recent controversies involving Veterans Administration services, said that returning vets should be provided opportunities for compensated treatment at a variety of institutions other than those associated directly with the government, citing Alpha Omega as one such alternative.

Carson’s visit on Sunday was as noticeably low-key as his address to a turnaway crowd in West Memphis last year was conspicuously high profile, and reporters in a brief press conference with the candidate wondered out loud about the chances that Carson, whose poll numbers and primary outcomes have been low, might drop out of the presidential race.

He responded that numerous people have begged him not to do that and that he remained disinclined to do so and would continue. Carson contrasted his dignified approach to the contest with last Thursday’s rowdy and rancorous GOP debate in Houston, which, he said, reminded him of a “W.W.E.” event and was “like being at the [Roman] Coliseum.”

“Guess what? I’m still here,” he insisted, urging “special interests” to “go jump in the lake.”