Cohen to Head Back to Cuba With Obama

It will the congressman's second official trip to the long-estranged island nation within the past year. 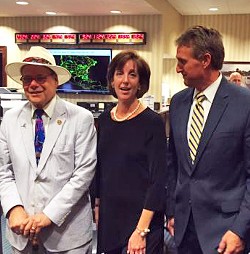 For the second time within a year, 9th District Rep. Steve Cohen (D-Memphis) will be visiting Cuba. He's going next week, as an official representative of the United States. Cohen, a longtime advocate of normalizing relations with Cuba, was a member of a bipartisan delegation to the island nation last August that, along with Secretary of State John Kerry, formally reopened the American embassy in Havana.

This time Cohen will accompany President Obama and a bipartisan group of U.S. Senators and Representatives.

A press release from the congressman's office spells it out:


[WASHINGTON, DC] – Congressman Steve Cohen (TN-09) will be among a group of U.S. Representatives and Senators slated to join President Barack Obama on his historic trip to Cuba on March 20-22. President Obama will be the first president to visit Cuba in 88 years after announcing in 2014 that he intended to re-establish diplomatic relations with the country. In August 2015, Congressman Cohen joined U.S. Secretary of State John Kerry and a bipartisan delegation of U.S. Senators and Representatives at the official re-opening of the United States Embassy in Havana, Cuba.

“I am proud to be joining President Obama on this historic and important trip,” said Congressman Cohen. “I have been a long-time supporter of re-opening diplomatic relations with Cuba and have cosponsored numerous bills in Congress to advance U.S.-Cuba relations. Not only is it the right thing to do, but it will also open new trade avenues for Memphis entrepreneurs, businesses, medical device companies and health-industry professionals, as well as improve Americans’ freedom to travel. I would like to thank President Obama for inviting me to join him.

I developed a love for Cuba when I was a 5-year-old with polio and had the privilege of meeting the late, great Cuban baseball legend Minnie Miñoso during an exhibition game in Memphis. Minnie spotted me at the game standing with crutches and sent me a baseball via one of his Caucasian teammates. At the time, the South was racially segregated, so he did not feel comfortable approaching a white child. This was an early lesson for me about civil rights and started my fondness for Cuba. I will be taking my Minnie Miñoso hat to wear at a baseball game while in Cuba to honor Minnie. I will also be taking additional hats Minnie’s son, Charlie, is sending to share with President Obama and Cuban officials.

Memphis’ ties to Cuba were strengthened last month when a 3-year-old Cuban child, Manolito Alejandro, received life-saving heart surgery at LeBonheur Children’s Hospital. I was pleased to help facilitate the surgery and delighted to meet young Manolito. In this instance, a young Cuban child benefitted from medical care in the U.S., but it is important to note that Cuba has some of the world’s best medical minds and practices and has made significant advancements in diabetes, cancer, and HIV research. Cooperation on medical procedures such as Manolito’s surgery will help advance medical diplomacy between Memphis and Cuba.”