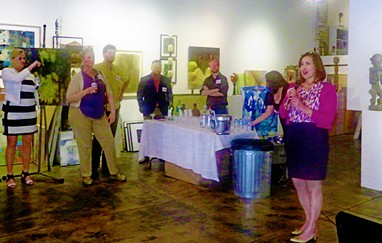 Holly McCall, running as a Democrat in District 65 (Williamson County) with the hope of having as a fall opponent disgraced GOP incumbent Jeremy Durham, took her campaign to Memphis Thursday night for a reception/fundraiser at the Jay Etkin Gallery in the Cooper-Young entertainment district.

The special drink offered guests at the bar was a “Rachel Jackson,” a champagne-based drink, chosen to remind guests that House Speaker Beth Harwell had reacted to alleged serial acts of misconduct by Durham (and an adverse finding by state Attorney General Herb Slatery that the legislator presented a hazard to “unsuspectring women” ) by relocating his office from the War Memorial building to the Rachel Jackson Building, across the street from the Capitol.

Durham was also subjected by Harwell to severe restrictions including a prohibition against speaking with staff members or interns (especially female ones) without supervision and a ban on his presence in Legislative Plaza or the Capitol when the legislature is not meeting.

Despite these unusual constraints and despite the fact that virtually every prominent leader of his own Republican Party has called on him to resign, Durham has filed for reelection, though he has two GOP primary opponents.

McCall, like Durham a Franklin resident, is a longtime Democratic activist who served most recently as press representative for the Hillary Clinton presidential campaign in Tennessee.