Not for the first time, there seem to be two local Democratic Party organizations in Shelby County, or at least two wholly disparate factions. A showdown of sorts is in order for next week. [REVISED, with note of correction]


If it’s July, the Shelby County Democratic Party must be live and well and getting ready for next month’s primary voting, right? 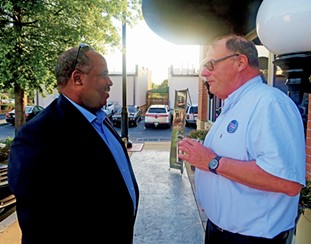 Well, not necessarily. Not for the first time, there seem to be two local Democratic Party organizations in Shelby County, or at least two wholly disparate factions — one loyal to the current chairman, Sheriff’s Department Lt Michael Pope and to state party chair Marty Mancini; and another, possibly constituting a majority, up in arms against Pope and Mancini over the issue of a legal settlement involving former local party chairman Bryan Carson.

Carson, the son of longtime state party secretary Gale Jones Carson, was forced by the local party executive committee to resign his chairmanship in February 2015 after the Shelby County party had missed a state Election Registry filing-disclosure deadline and after an informal committee audit determined that party funds amounting to as much as $10,000 could not be accounted for, then or later. The party then proposed a settlement whereby Carson might repay the local party a lesser sum of $6,000 in installments of $100 a month. The offer was rejected in a letter by Carson’s attorney, Robert Spence, but may have been agreed to in some form later on, a matter key to the current disagreement.

[NOTE: It now appears that a letter made available to the Flyer in which Spence is seen to be explicitly rejecting a proposal may actually have been in response to a later proposal from a committee source demanding a much larger repayment amount from Bryan Carson of $26,336.00, with a $5,257.20 down payment and a monthly note of $585.24. This would be a reference to a matter referred to in the next paragraph.]

Meanwhile, the party missed another financial-disclosure deadline early this year, and, in April, Carson’s elected successor as party chair, Randa Spears, and the party vice chair, Deidre Malone, resigned their positions, pleading a need to focus more on their livelihoods. One known catalyst, however, was the still pending Carson affair, in which the two departing officers had supported the $6000 payoff. Meanwhile, an ad hoc party committee conducted a second audit, maintaining that, by means of a second, unauthorized bank account, Carson had managed to misappropriate another $15,000-plus. Adding that sum to the original raw number of $10,000 nudged the amount of unaccounted-for funds over the $25,000 mark, and a majority of the executive committee voted in early June to seek Carson’s prosecution for embezzlement.

Meanwhile, Pope, who, ironically, was elected the new chairman in the same meeting as the vote to prosecute, was in contact with state party chair Mancini, who, along with Pope and a minority faction of the local party, favored getting past the Bryan matter so as to move on to electoral matters in this election year. Late last week, Mancini, regarding the Carson affair as “already settled,” wrote a letter to Shelby County executive committee members, claiming that state party bylaws gave her “supervisory and organizational” authority over local party matters and giving the local party a de facto ultimatum of July 1 to endorse the $6,000 repayment proposal or risk losing the local party charter. (Interestingly, some local party members, willing and anxious to start again from scratch, have actually called for a voluntary surrender of the charter!)

There are numerous other complications, charges, and counter-charges, but the bottom line is that Pope has signed a statement authorizing the settlement, and Mancini has accepted it. What seems to have been a local party majority petitioned Pope for an emergency called meeting by the July 1 deadline to dispute the settlement, alleging that it had not been authorized by the committee. Citing party bylaws requiring what he said was a 15-day notice for a special called meeting, Pope rejected the idea of having one.

The committee will hold its next regular meeting on Juty 7, at which, it seems clear, the whole confusing affair will be the subject of a knock-down, drag-out. For the moment, everything is uncertain, including the legal status of the alleged settlement with Carson, conflicting claims over Mancini’s authority, and the question of who it is that actually runs — or will run — the Shelby County Democratic Party, which, as Mancini noted in her ultimatum letter of June 24, has experienced “many years of dysfunction.”