Candidates Pulling Out the Stops

Some call on ex-presidential candidates for backup, amid charges of campaign skullduggery and one bona fide arrest.

Late developments in various legislative races and one intensely contested congressional race are heating up beyond even what your sorely taxed thermometers are showing.

*The latest flare-up in the 8th District congressional race is a contention by the George Flinn campaign that one of Flinn’s GOP primary foes, former U.S. Attorney David Kustoff, is behind a series of attack ads which, among other things, accuse Republican Flinn of (horrors!) having supported a Democrat in a previous election campaign.

That Democrat, of course, is Shea Flinn, currently a vice president of the Greater Memphis Area Chamber of Commerce and a former city councilman who did in fact enjoy support from broadcaster/physician George Flinn — who happens to be Shea Flinn’s father.

That the two have maintained close family relations while differing significantly on political matters has never been exactly a secret.

The younger Flinn, Jackson radio talk host Frankie Lax, and John Niven, a campaign aide to George Flinn have all pointed to Kustoff as the source of the series of attack ads, and Lax has cited documents relating the attack ads directly to an advertising agency controlled by family members and associates of former Arkansas Governor and presidential candidate Mike Huckabee, who is supporting Kustoff in the 8th District race and has actively campaigned for him. 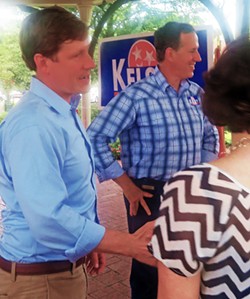 *Meanwhile, Kustoff is not the only 8th District candidate leaning on support from a former Republican presidential candidate. State Senator Brian Kelsey was accompanied on a district tour on Tuesday by former Pe nnsylvania Senator Rick Santorum, runner-up to Mitt Romney in the GOP primary contests of 2012.
At Collierville, end stop on the tour, Santorum, who emphasized his conservative position on social issues during his run for the presidency, vouched for Kelsey as someone of similar views and as a fiscal conservative as well.

Speaking to reporters in Memphis, Stewart pinpointed the Rev. Keith Williams, whose opposes state Rep. Johnnie Turner in District 85, as a faux Democrat who has failed to vote in Democratic primaries in a series of recent election and did not vote in either general election campaign waged by President Obama. (Williams has also benefited from name confusion with Memphis/Shelby County Education Association CEO Keith Williams, Stewart noted.)

Stewart also charged that Republicans are backing the Democratic primary campaign of Johnnie Hatten, a charter school/ASD advocate who in the District 98 race is challenging state Rep. Antonio Parkinson, a consistent critic of the ASD and other educational initiatives pursued by the administration of GOP Governor Bill Haslam.

*Finally, GOP state Representative Curry Todd, the District 95 incumbent who has been accused by primary opponents Diane George and Mark Lovell of stealing their campaign signs but has either denied doing so, despite apparent photographic proof of the fact, or maintained he had permission to remove the signs, was arrested this week by Sheriff’s deputies for — yep, stealing opponents’ yard signs.