In other results, Curry Todd loses reelection bid for his House seat, Stanton holds on as General Sessions Clerk. 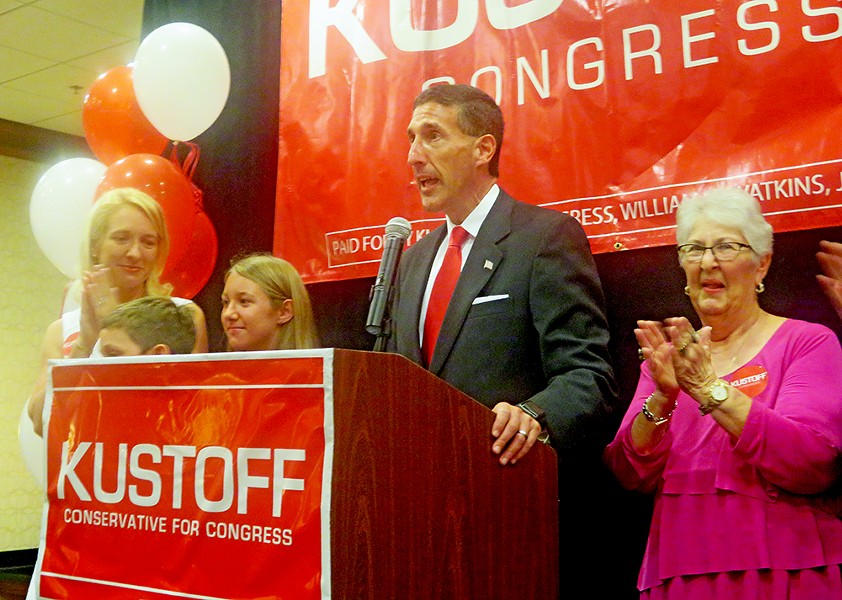 On his second try, lawyer David Kustoff, a former U.S. Attorney for Shelby County, has won a congressional seat.

Kustoff, who ran second to Marsha Blackburn in a multi-candidate race for Congress in the 7th District back in 2002, finished ahead of 12 other candidates in the Republican primary for the 8th Congressional District, which has been reapportioned to take in much of the same territory that Kustoff ran in before.

Although Kustoff will have to face a Democratic opponent, Rickey Hopson of Arlington, winner of the Democratic primary over Gregory Alan Frye (2595 votes to 1736), and several independent candidates in the November 8 general election, victory in the GOP primary is tantamount to winning in the 8th these days and in much of the rest of Tennessee, as well.

In Shelby County, the order of finish was Kustoff, Luttrell, Kelsey, Flinn, and Register of Deeds Tom Leatherwood.

Speaking to joyous supporters at the Marriott Hotel on Poplar Avenue Thursday night, Kustoff professed himself “humbled” by the opportunity to serve the 8th District and reminded the crowd that he had another election to run in the general.

He said he had run “for all the right reasons,” mentioning among them a concern for public safety and national security, maintenance of America’s southern border, and countering “wasteful spending.”

Kustoff’s greater edge over Flinn within Shelby County, some 4500 votes, as compared to 2500 over the runner-up in the district as a whole, was clearly the key to his victory; his Shelby County totals owed much to the winner’s long-term service in Republican Party ranks and a resultant hold over local party activists.

Kustoff has also long been prominent in state GOP ranks, having been Tennessee campaign manager for George W. Bush’s presidential campaign in 2000.

In the late stages of the campaign, Kustoff and his supporters went on the attack and generated some controversy, as with a late ad from a PAC friendly to Kustoff that accused Flinn of having once backed a “Democrat” for office. With less than a day to respond, Flinn pointed out in an ad of his own that the Democrat in question was his son, Shea Flinn, who served a brief appointive term in the state Senate and was elected twice to the Memphis City Council in non-partisan elections.

*Plagued by late publicity accruing to his arrest for stealing opponents’ yard signs, District 95 incumbent state Representative Curry Todd, with1493 votes,  was easily beaten in the Republican primary by Mark Lovell, who had 4437 Other candidates were Diane George, with 1149 and Dana Matheny, with 833.

*Larry Miller, Incumbent state Representative in District 88, with 2794 votes, turned away Stephen Christian, with 697, in the Democratic primary.

*Dwayne Thompson's 1481 votes won over Earl LeFlore's 983 in the Democratic primary for House District 96 for the right to challenge incumbent Republican Steve McManus, who defeated challenger Price Harris with 2717 votes against 877 in his primary.

*Valerie Smith, a recent gubernatorial appointee to serve as Circuit Court Judge in Division III, defeated Michael G. Floyd, with 51,300 votes to 22,712,  but another appointee, Chancellor Jim Newsom, was the victim of a vote split in the race for Chancellor, Part III, his 23,850 votes losing to challenger Joe Jenkins, with 20,431. David Ferguson was a third candidate, with 18,056.

*Despite fears of his supporters that a stiff GOP turnout in the 8th District congressional race might aid Republican challenger Richard Morton, General Sessions Clerk Ed Stanton Jr., the Democratic incumbent, was able to prevail, with 45,432 votes to Morton's 28,121. Independent William Chism had 5493.

*Incumbent Stephanie Love, with 3232 votes, defeated Sharon Field, with 2242, in the District 3 race for the Shelby County Schools Board.