Though it was not so obvious publicly, with 13 candidates running, the two campaigns saw themselves engaged in a two-person race.


There are some interesting backstory twists to the 8th Congressional District Republican primary just concluded, in which former U.S. Attorney David Kustoff 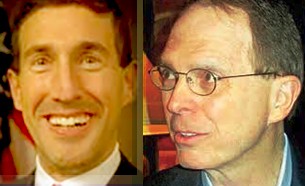 People in the Flinn camp were still seething over a late Kustoff ad which accused broadcast executive/radiologist Flinn of having supported “a Democrat” in a prior election. The unnamed Democrat was Shea Flinn, the doctor’s son, who many years ago ran an unsuccessful race for state Representative and later was appointed to an interim position as state Senator.

Shea Flinn, now a vice president of the Greater Memphis Area Chamber of Commerce, still later was elected to two terms as a Memphis City Councilman. He was also a member of the inner circle in his Council colleague Jim Strickland’s successful campaign for Mayor last year.

The fact that Strickland was, before his election, the law partner of David Kustoff created an odd and somewhat ironic overlap in the congressional race. But there were many other such overlaps, such as the fact that many of Kustoff’s chief fund-raisers — notably Mike Keeney, Mitch Graves, and Billy Orgel — also had served Strickland in that capacity.

The two campaigns also employed Steven Reid of Sutton Reid, a Memphis-based political consulting firm, though Kustoff’s chief strategist was Chip Saltsman, who had been campaign manager for the presidential campaign in 2008 of former Arkansas governor Mike Huckabee, who endorsed Kustoff in the congressional race.

A further connection between the Strickland and Kustoff campaigns was that they shared the same pollster, Patrick Lanne of Public Opinion Strategies, a firm based in Alexandria, Virginia.

Although the fact never surfaced publicly, Lanne’s polling for Kustoff had, until the week or two before the election, showed a consistent lead for Flinn in the 13-person 8th District race — as did Flinn’s own polling. Flinn’s campaign loan to himself of $3 million had also allowed the Memphis physician to advertise not only more consistently than other candidates but in more places throughout the district (e.g., in the Paducah, Kentucky, media market).

As Kustoff put on a well-funded late rush, the congressional race became, basically, a two-person affair between himself and Flinn, whom he was able to surpass only at the end of the race, and mainly through his edge of 4500 votes over Flinn in Shelby County (as against a mere 2500-vote margin in the district as a whole).

The ‘Flinn-supported-a-Democrat’ ad was a late thrust, and the Flinn campaign had only a day or so to counter it, with a fresh ad of their own, pointing out the family relationship between the two political
Flinns. The Flinn campaign’s bitterness over the Kustoff ad was paralleled to some degree by a Kustoff supporter’s observation that in Flinn’s response ad, he had made a point of calling himself a Christian.

(Kustoff is Jewish, and, if he is successful in November, as is expected against the Democratic nominee Rickey Hopson, a political newcomer, Memphis would have not only two congressmen for the first time since 1994, the city would have two Jewish congressmen, the other being Steve Cohen, a Democrat, in the 9th District.)

In any case, though few outside the two campaigns were aware of it, the showdown between Flinn and Kustoff overshadowed other candidates in the campaign’s late stages, notably Shelby County Mayor Mark Luttrell, an early leader in the race, and state Senator Brian Kelsey of Germantown, who had been expected to contend.