Governor says bill raising blood-alcohol levels for young motorists must be amended, or state could lose $60 million in federal funds. 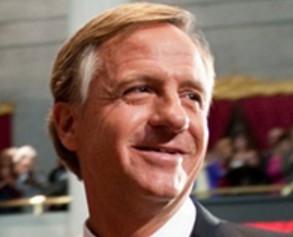 Governor Bill Haslam, in Memphis on Thursday to visit Winridge Elementary School to klick off a statewide tour of K-12 public schools, said he would call a special session of the legislature to look into amending a DUI law passed in the last session that raised permissible alcohol levels for 18- to 20-year old motorists.

The National Highway Safety Administration has announced that the state is liable to lose 8 percent of its federal highway funding annually, or $60 million, as a result of raising the alcohol blood level from .02 per cent to .08 for the affected youthful motorists. The higher amount is in violation of the federal government’s zero tolerance policy for the 18-to-20 year-old group.

“$60 million is too much money to give up,” Haslam told reporters. Noting that members of the state’s congressional delegation are negotiating with the federal government for some sort of compromise on the funding matter, the Governor said the legislature would have to act if those efforts failed.
As of now, the change in funding is scheduled to begin in October.

• The Governor also said, “I’m not a fan” of efforts to decriminalize recreational marijuana use, when asked about a pending ordinance before the Memphis City Council to allow police to give misdemeanor tickets rather than to make felony arrests for possession of small amounts of marijuana. Haslam said, “I do think there are people spending more time in jail than they need to,” but he said outright decriminalization would not be a “helpful signal” in a state where drug abuse remains a problem.