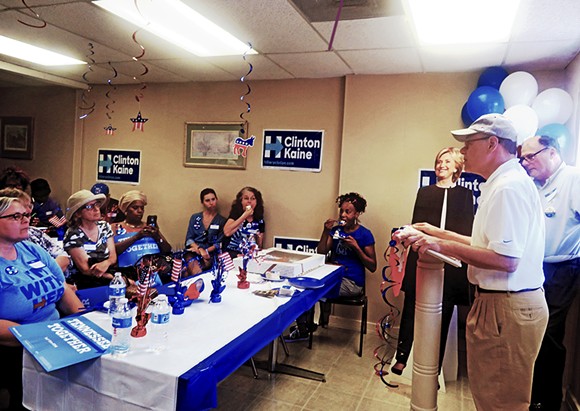 Shelby County’s Democrats may be —— for the moment, anyhow — lacking a formal local party organization (after the decertification of the Shelby County Democratic Party by state party chair Mary Maninci). But that fact apparently isn’t hindering their Get-Out-the-Vote efforts. 9th District congressman Steve Cohen kicked off several days of party GOTV activity on Saturday with a brief but fiery speech to supporters of Hillary Clinton’s presidential race at their new headquarters on Poplar.

“This is Armageddon,” Cohen told a sizeable crowd crammed into a meeting room at the headquarters. “We have a choice between a lady who wants to carry on Barack Obama’s legacy and …the most Neanderthal candidate we’ve ever had as the nominee of a major political party.”

Clinton’s opponent Donald Trump is “trying to win with lies and hate and misinformation,” and by “dividing people,” Cohen said.

Linking Trump to Russia, Cohen said, “We’re going to find out more and more about his contacts with Russia. We’ve never had a candidate in our history who owes so much, or any amount, for that matter, to a foreign nation. And particularly a foreign nation that is one of our most powerful enemies, or the antithesis of what America is about.”

Cohen said Clinton’s campaign was one of “looking out for America,” while Trump’s was devoted to “self-interest” and involvement with “oligarchs.”

He said that Clinton “will appoint a Supreme Court that will take us in the right direction,” defending the legacy of such landmark Court decisions as Brown vs. Board of Education on desegregation and Baker vs. Carr on one-person-one-vote.

She would further safeguard the environment, “protecting air and water and not making the Koch Brothers first,” developing “new forms of energy — sun, air, and not coal,” and taking action in the sphere of climate change. “Millennials need to wake up before they drown,” said Cohen, conjuring up a nightmare vision of melted polar ice caps and rising water levels.

Scoffing at various public criticisms of Clinton for faults of her own, Cohen said, “The perfect is enemy of the good. And I’m telling you, Hillary Clinton is very, very good.”

The congressman then extolled President Obama, who, he said, “has been spectacular,” making America “more the country it was intended to be than ever before.” Detailing his attendance, the previous day at the formal opening of the new Museum of African-American History in Washington, Cohen even had a kind word for former Republican president George W. Bush, who “did the right thing” in helping get that museum project started."

“And he’s for Hillary, too,” Cohen theorized about Bush, who is known to be among several notable Republicans giving Trump a wide berth in this election. That drew an appreciative laugh from his audience.

Other local events planned by the Hillary Clinton campaign include a Sunday night “African Americans for Hillary Rally” at Christ Missionary Baptist Church at 494 South Parkway East and a debate-watch party Monday night at the Trolley Shop Market, for the televised Clinton-Trump encounter.