Keith Ellison, Early Leader to Head the DNC, in a Speech to Tennessee Democrats

Hear his remarks to a joint meeting of the Tennessee and Minnesota delegations at the Democratic National Convention in August. 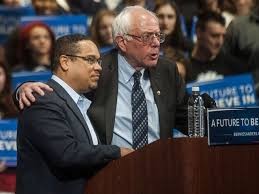 In the aftermath of its unexpected and shattering defeat in the presidential race, coupled with a failure to recapture control of either chamber of Congress, the Democratic Party will be looking for new leadership to rescue its hopes.

Among the first imperatives facing the party is the selection of a new chairman of the Democratic National Committee. Whoever holds that position will be responsible for clarifying and overseeing the Democratic agenda for the next several years, leading up to mid-term elections in 2018 and another go at the Presidency in 2020.

One of the all-but-declared frontrunners for the chairmanship is U.S. Rep. Keith Ellison of Minnesota, who, insofar as his name rings any bells at all, is mainly known as the only Muslim serving in the Congress or,  as a leader of the congressional Progressive Caucus, having been one of the chief supporters of the Bernie Sanders presidential campaign.

Tennesseans who went to the Democratic National Convention in early August got a more close-up sense of Ellison and his views during a joint breakfast of the Tennessee and Minnesota delegations mid-way of the Convention.

In the course of his quite animated remarks at the breakfast, Ellison had some interesting things to say about Tennessee and its folkways and Memphis in particular, and he recalled one of the painful memories in our local history.

Here, to be heard as he said them, are his remarks to that delegation breakfast:

Keith_Ellison_s_speech_to_Tennessee_and_Minnesota_delegates.mp3
Update Required To play the media you will need to either update your browser to a recent version or update your Flash plugin.