The Mayor, an opponent of TVA’s drilling plans, had attended the recent Water Board hearing on well permits but was not permitted to speak. 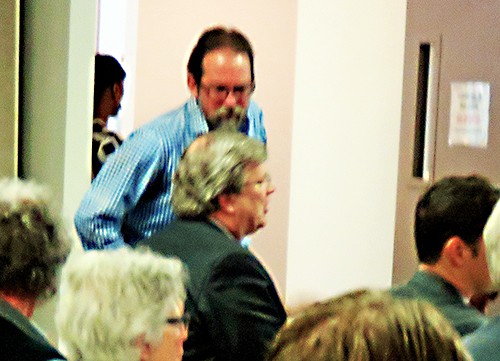 Memphis Mayor Jim Strickland is researching local water-permit procedures with an eye toward giving the city some power of approval over future permits — and simultaneously to ascertain the city’s wherewithal under existing rules.

Strickland, an opponent of TVA’s plan to use water from the Memphis sand aquifer, source of the Memphis area’s drinking water, to cool a new power plant, had prepared to speak at the Shelby County Water Quality Control Board’s meeting two weeks ago in which the Sierra Club’s appeal of well-drilling permits for TVA was unanimously rejected. But he was informed the night before that the Board meeting, chaired by special presiding officer Bob McLean, was “not a public hearing” but a judicial one with strictly formalistic rules.

The Mayor was allowed to attend the hearing but only as a spectator, along with other members of the audience.

The outcome of that hearing has not sat well with Strickland or with other local public officials, including state Senators Lee Harris, a Democrat, and Brian Kelsey, a Republican, who oppose the drilling and have announced plans for bipartisan action to hash out the matter publicly.

And a freshly incorporated Protect Our Aquifer organization, including the Sierra Club, whose members regard the TVA drilling as potentially contaminating to the Aquifier water supply and whose appeal had prompted the Water Board hearing, plans to challenge the board’s decision in Chancery Court.