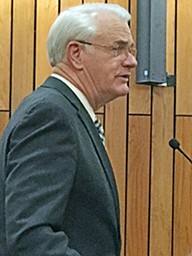 Last week, Tennessee Governor Bill Haslam  proposed a 7 per cent increase in the state gasoline tax to enable work on a backlog of $10 billion worth of infrastructure pr ojects that he and Commissioner John Schroer of the Tennessee Department of Transportation deem long overdue but undone for lack of funding.

Haslam and Schroer had been touring the state and actively campaigning for these infrastructure projects for at least two years, localizing their appeal as circumstances called for, hinting (and sometimes saying outright) that a substantial gas-tax increase was necessary, and hoping thereby to arouse a groundswell of interest, or at least acquiescence in the state at large.

Along with new fees on electric vehicles and rental cars, the proposed tax increase would pay for an overhaul plan to which the Governor has given the distinctively Haslamian name of "The IMPROVE Act." (The capitalized initials stand for " Improving Manufacturing, Public Roads and Opportunities for a Vibrant Economy,.")

The IMPROVE Act calls for the gasoline-tax increase to be accompanied by — and to some extent, offset by — reducing the state sales tax on groceries by a further half percent, by $113 million in cuts to the state's business taxes, and by cuts to the Hall Income Tax.

Haslam's announcement last week was made in the presence of an assortment of mayors and other officials from localities around the state, and he picked up what could be an important endorsement of The IMPROVE Act Monday from Shelby County Mayor Mark Luttrell, who appeared before the regular meeting of the Shelby County Commission to state his support.

Citing what he said was a “critical need” for infrastructure improvements in Shelby County, Luttrell said that the Governor's proposal called for more than $9 million to be spent in Shelby County and in the county's several municipalities. He told the Commissioners that the tax increase and the parallel tax reductions proposed by Haslam would roughly balance.

"There will be some opposition to it in the General Assembly," the Mayor cautioned. (Indeed, state Senate Majority Leader Mark Norris of Collierville, for one,  has in the fairly recent been publicly dubious about a gasoline-tax increase.) Luttrell said that "representatives from Nashville" would be coming to Memphis shortly "to make the case for the cuts and for what projects should be prioritized."

(County CAO Harvey Kennedy suggested after the meeting that in the process of considering the measure individual legislators would likely have their own pet projects to argue for.)

Terming his statement to the Commission a "heads up," Luttrell said he would be coming back to the Commission seeking "a more formal resolution for support," once the proposed measure was cast in its final form.

The Governor and TDOT have prepared an itemized list of more than 200 proposed infrastructure projects across the state's 95 counties The two pages of the Governor's backlog report reproduced below contain a list of Shelby County projects that Haslam and Commissioner Schroer deem ready for consummation under  "Improve Tennessee," should the legislature enact the requested 9 percent increase in the state gasoline tax.