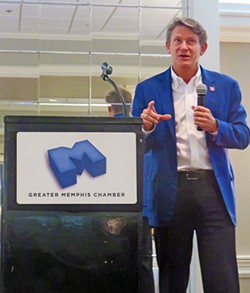 Randy Boyd, the soon-to-be former state Commissioner of Economic and Community Development, is widely considered a likely Republican gubernatorial candidate in 2018, and, speaking to a breakfast of the Greater Memphis Area Chamber of Commerce's small business council on Wednesday, he unveiled what could be a telling secret weapon in his campaign.

In the course of extolling teamwork as the means whereby Tennessee could out-distance other, more resource-rich states in economic growth, Boyd, a Knoxvillian, broke off from a recitation of relevant statistics to exclaim, “How about that Kentucky loss last night!” He referred to the UT basketball team’s Tuesday night 82-80 upset in Knoxville of coach John Calipari’s #4-rated Kentucky Wildcats. And when the Chamber audience responded appreciatively, Boyd said, “I guess we share an antipathy to Calipari.”

(The Kentucky coach, formerly idolized in Memphis for his successful reign as coach of the University of Memphis Tigers, became highly unpopular here after he abruptly decamped for Lexington in 2009, taking his highly prized recruit class with him and leaving the Tigers in the lurch for an NCAA rules violation during his tenure.)

When an interviewer suggested, after the speech, that an anti-Calipari platform would go over well with Memphis voters, Boyd replied, “I think it will go well in Knoxville, too.”

The Commissioner, who will depart his state government post on February 1 to resume the chairmanship of the Knoxville-based Radio Systems Corp., was moderately coy about his gubernatorial announcement plans: “Sometime in February I’ll decide what I’ll do next. When I get back to Knoxville with my home and my dog and my wife, we’ll see what the world looks like from that perspective.”

Boyd, who in 2013 was named special adviser on higher education to Governor Bill Haslam, was named to his Commissioner’s post in January 2015 and has been praised by the Governor for being the major force behind such educational innovations as Tennessee Promise, which offsets the cost of attending community college and Drive to 55, an initiative to increase the number of Tennesseans holding post-secondary degrees or diplomas.

He is also credited with statistical leaps forward in industrial growth and job creation, subjects which were the major focus of his remarks in Memphis.