Sessions and Trump Made Their Alliance in Millington Last Year

The Liberty Bowl’s Steve Ehrhart had a key role in setting up a crucial get-together between the president-to-be and his ultimate choice for Attorney General.

Jeff Sessions, the U.S. Senator from Alabama who was narrowly confirmed this week as President Trump’s choice for U.S. Attorney General after weeks of controversy, made his basic connection with the President-to-be when candidate Trump held one of his monster rallies in the Memphis suburb of Millington on February 27 of last year.

The intermediary was Memphian Steve Ehrhart, president of the AutoZone Liberty Bowl annual post-season classic. Ehrhart was a longtime friend of Trump’s and a close colleague during the early 1980s, when Trump owned the New Jersey Generals of the USFL professional football league and Ehrhart was president of the Memphis Showboats. Both were members of the league's executive committee and collaborators on key matters.

Sessions had met Trump briefly some years ago, when the New York billionaire testified before a Senate committee on a routine matter, and the Alabama Senator had already attended at least one Trump rally. But the two had never sat down and got fully acquainted until the evening of that campaign rally in Millington.

Ehrhart, who will say only that “it became possible for me to facilitate a meeting” between the Senator and the presidential candidate, was prominently in attendance at the Millington rally, and Sessions was at a nearby location, waiting for the introduction to be arranged. When the rally ended, Ehrhart brought Sessions on 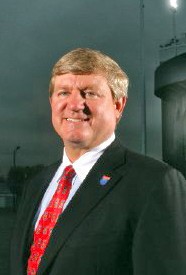 board the private jumbo jet that Trump campaigned in, and Trump and Sessions had what turned out to be a meeting of the minds.

When Trump resumed campaigning the next day, on February 28, 2016, he had Sessions with him, and, with Super Tuesday’s presidential primaries just around the corner, the Senator made big news when he stepped aboard Trump’s platform at a rally at Madison, Alabama, and became the first, and, for a long time, the only Senator make a formal endorsement of the New Yorker.

County Commissioner Terry Roland, who had been the major local force in setting up the Trump rally in Millington, said this week that he had long been aware of Ehrhart’s role in facilitating Sessions’ get-together with Trump.