She and State Representative White are both eyeing the soon-to-be-vacated Norris state Senate seat. 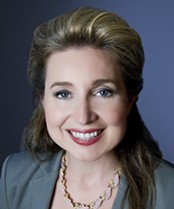 With the matters of a Shelby County tax rate and a county government budget now safely (if that’s the right word) out of the way, the Commission next turns to the election of a chair for 2017-18 to succeed the current chair, Democrat Melvin Burgess. That intramural election is scheduled for next Monday’s regular Commission meeting, and the odds-on favorite is Republican Heidi Shafer, the Commission’s vice chair.

Indeed, it is difficult to find anyone, Democrat or Republican, even considering opposing Shafer, currently the chair of the Commission’s audit committee and, along with fellow Republican Terry Roland, a leader in

what has been a two-year challenge to County Mayor Mark Luttrell’s prerogatives, especially with regard to fiscal oversight matters.

Although there have been some deviations from the Commission’s “gentleman’s-agreement” rules of succession in the not-too-distant past, those unofficial rules — mandating a rotation of the chairmanship each party

by party affiliation, as well as the elevation of a Commission vice chair to the chairmanship in the succeeding year — seem to be holding this time around.

The main contest on Monday may be between two Democrats, Eddie Jones and Willie Brooks, for next year’s vice-chairmanship.
Commissioner Shafer, on the cusp of achieving one political goal, may have her sights set on yet another. She is known to be seriously considering a run for the state Senate currently occupied by Mark Norris of Collierville, who was just nominated to a federal judgeship by President Trump and is virtually assured of being approved by the Senate.

Along with Shafer, another known aspirant to the Norris Senate seat is State Representative Mark White, the chairman of the House Education Committee. White, like Shafer, is a resident of Memphis. Both he and Shafer have indicated a willingness to relocate their households in the Collierville area now served by Norris.

Other Republican names are expected to come to the fore in the competition for Norris' District 32 seat. One possible addition to the candidate lists is Bill Giannini, a former Shelby County GOP chairman, a former Election Commission chair, and a deputy Commissioner of the state Commerce Department in Nashville in recent years.

Giannini, a native of District 32, is a consultant these days and is spending much time in Memphis, working with the Strickland administration on a project, among other things.
He said Thursday that he "care(s) very deeply who serves in that seat," has made a point of lionizing Norris on his Facebook page, and is concerned that Norris' successor not be someone who "hasn't lived a day in the district."

That, of course, describes Shafer and White, though Giannini professes to have high regard for both. Asked point-blank if he wants to be a candidate, Giannini is evasive, saying that he wants to be sure, first of all, that the seat will indeed be open (technically, Norris could be serving in the Senate for months awaiting Senate confirmation).