The first-term Shelby County Commissioner did indeed have a "major announcement" to make to a generous number of attendees.

August 28, 2017
comment
There was real mystery when County Commissioner Reginald Milton issued an online invitation to a generous number of his friends, who cross all sorts of race, social, political, and gender lines but have one thing in common: A disproportionate number of them are movers and shakers in Memphis and Shelby County.

The invitation was to a birthday party at the Stax Museum on McLemore, where, said the invite, a “major announcement” would be made. Immediately the politically inclined among the invitees began to speculate on what race it was Milton was choosing to announce for? President? After all, he is by profession a community organizer, just like the past previous President, Barack Obama. State Representative? State Senator? Governor? Mayor? And, if the latter, which kind of Mayor? City? County?

So what did the invitees find when they arrived? Here is the post-event reveal from Milton himself, on his Facebook page:

I want to say how much I truly enjoyed sharing my special day with all my dear friends. The party was a blast.
For those who were not at my Birthday Bash and wanted to know what the "big" announcement was, it involves my nonprofit, SMA. We have secured additional funding and are moving forward with converting a 57,000 sq. ft. warehouse into a multi-purpose center. Plans for the "Urban Warehouse" include a technical college, a nonprofit incubator, a youth development/mentoring center, and a foster care support agency. Oh, by the way, yes I do plan to run for re-election for Shelby County Commission - District 10. Thank you all! 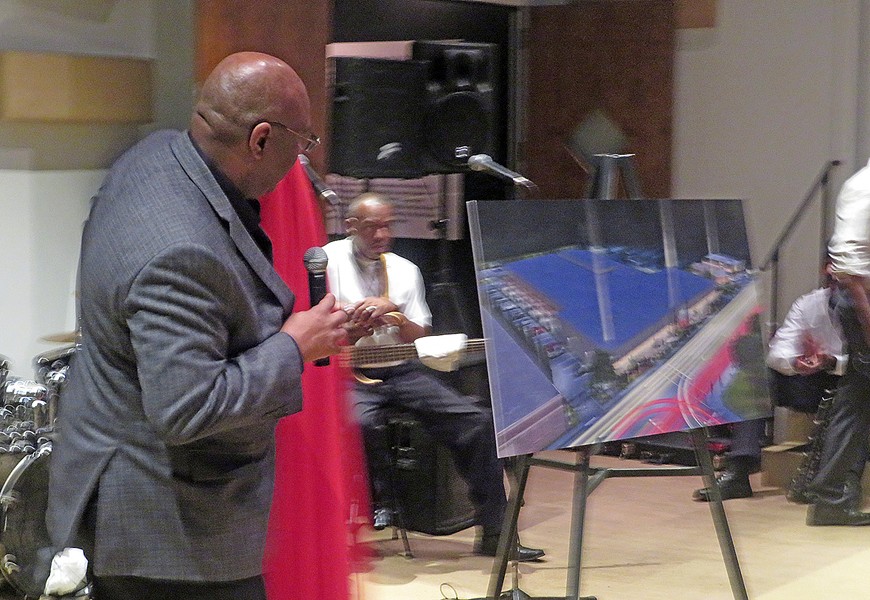 Milton was certainly right about the party’s being a blast. Good food, a bar, good company, a band, dancing, and this was Stax, after all, where the walls teem with exhilarating exhibits from Memphis’ musical past.

There was a “show and tell” by Milton of the plans for his forthcoming Urban Warehouse project. There were endless opportunities for group pics and selfies by an endless number of smart-phone photographers, who placed the results on their Facebook pages..

And — piece de resistance! — there was cake, of course, as what well-attended birthday party should not have cake? Everybody got a piece; there was no resistance.