One political race that looms before the voters of Shelby County as more than usually competitive is that for Sheriff, and, though more candidates, both Republican and Democratic, are sure to make a claim upon the job in the 2018 election, there is general consensus on the front end that the candidates to beat are Republican Dale Lane and Democrat Floyd Bonner, both highly credentialed..

Lane, a former Deputy Sheriff, is current director of the Shelby County Office of Preparedness, while Bonner is Chief Deputy Sheriff, the first African American to hold that office.

In a reversal of the cross-party situation in 2014 when incumbent Sheriff Bill Oldham, a Republican, was assisted in his reelection bid by a prominent Democrat, longtime political broker Sidney Chism, this time Democrat Bonner can count on the public support of a major figure from the other party, no less than term-limited Sheriff Oldham himself. 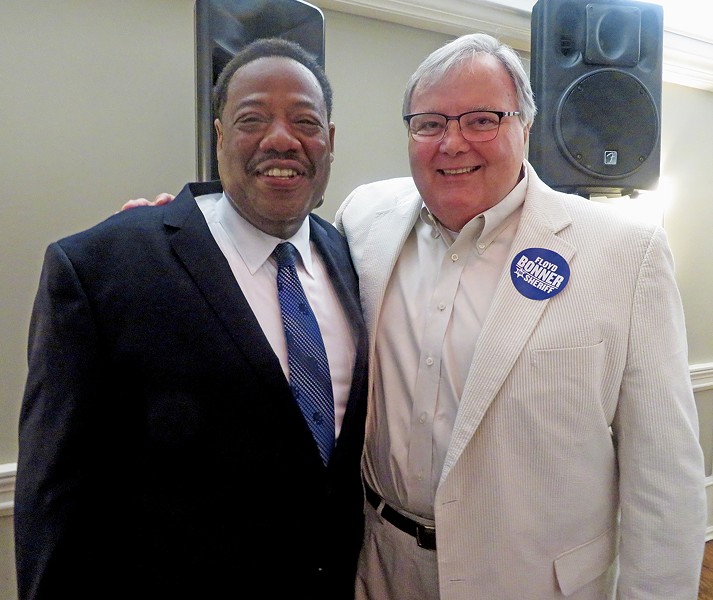 Introducing Bonner to a massive and diverse crowd of several hundred at a combination fundraiser/campaign kickoff in the Racquet Club Tuesday night, Oldham lavished praise upon his chief deputy for his career progress through the ranks and his accomplishments and proclaimed, “I’m going to do something that my predecessor [then Sheriff, now County Mayor Mark Luttrell] didn’t do for me, I’m going to fully endorse Floyd Bonner.” The crowd anticipated Oldham and, before his sentence was halfway through, interrupted him with loud and sustained applause.”

Continuing his introduction with a vow to “put the right man in that chair at 201 Poplar,” Oldham then beckoned Bonner, and the two men embraced before Bonner made his own remarks, beginning with a reciprocal tip of the hat to Oldham, acknowledgment of his family members who were present, and a statement of gratitude at the turnout, making special note of  the clergy in attendance (no small factor, inasmuch as Lane, too, can boast of support from the religious community).

“I love coming to work every day. There’s no other place that I’ve ever thought about working at but the Shelby County Sheriff’s Office,” said Bonner, a veteran of 37 years in the Department. “I’m not tired yet, I’ve still got a little in the tank, and I enjoy getting up every day.”

Bonner mentioned his role in “being in on the ground floor” of the Department’s expanding responsibility for Juvenile Court detention and noted that he had started his ascension in the Department all those years ago with service in the County Jail, nobody’s idea of a glamor assignment and a piece of experience that he cites by way of encouraging new recruits.

“I tell them now, ‘I started just like you did, I started out slick-sleeved and wild-eyed and didn’t know what to expect….But I’ve had a great career, I love what I do….There’s nobody in this race with more experience than me,” said Bonner, who concluded optimistically, “You know, we are going to win!”