In Memphis, Rep. Steve McDaniel warns that violators of state law on statue removal can be "prosecuted for felonies." 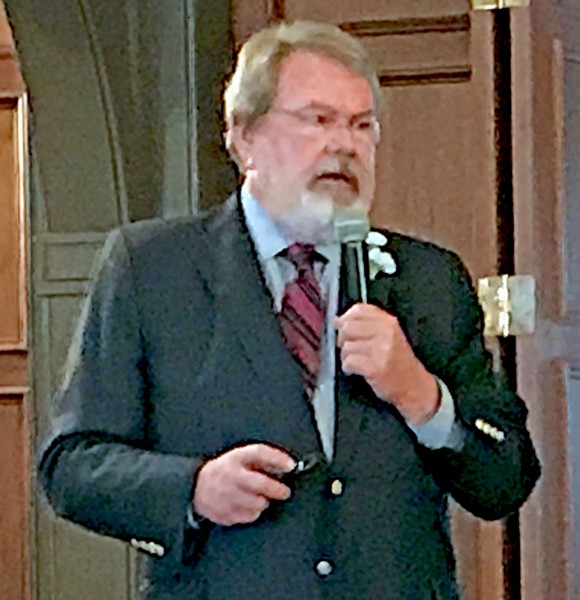 One day after the City Council agreed unanimously to adopt an ordinance allowing relocation of local statues of Nathan Bedford Forrest and Jefferson Davis regardless of whether formal state ap proval can be obtained, the author of the state’s Heritage Protection Act weighed in with words of caution.

“That’s against the law. They’d be prosecuted for felonies for destroying public property. Or if somebody vandalizes the property, they’d have to suffer the consequences,” said
State Rep. Steve McDaniel (R-Parkers Crossroads) in Memphis on Wednesday.

McDaniel was in town to address a Kiwanis luncheon at the University Club and discussed the matter of preserving Civil War history both during and after his remarks to the club. He made the statement about “consequences” when, in the course of an interview after his speech he was reminded that the Heritage Protection Act prescribes no specific penalties for violators of it.

“We did that on purpose,” said Rep. McDaniel, who also functions as Deputy Speaker of the state House of Representatives. In theory, there would be no need to prescribe specific penalties, he said. “We expected governments to follow the law. That’s why we have no penalties.”

But he repeated: “ If [people] don’t follow the law, then they have to suffer the consequences….We’re one of the few states that has a process through law that if you want to move or remove monuments, there’s a process to follow.”

McDaniel was clear about his own outlook. “I disagree with moving the statue. I fully support that statue staying here in Memphis at its current location. I think his and all the statues need to stay where they are.”

A longtime Civil War buff, McDaniel has been city manager of Parkers Crossroads since the Henderson County town was first incorporated in 1981.

That role also gives him direct supervision of the town’s major industry, the large and expanding park and museum area which sprawls on both sides of Interstate 40 at mile-marker 108 and commemorates the Battle of Parkers Crossroads.

The battle, which took place on December 31, 1862, was, as McDaniel explained to the Kiwanians, one of the first encounters which earned distinction for Confederate General Forrest, whom the legislator referred to wryly as “a man you see in the news sometimes now, especially in Memphis.”

Forrest, a commander of cavalry, was in the Parkers Crossroads area as part of a mission to harass Union forces in West Tennessee and to interdict the movement of troops and supplies via railroad. As McDaniel explained, he was surprised at Parkers Crossroads and flanked on both sides by separate Union Army contingents but escaped the potential trap by a bold decision to “charge ‘em both ways.”

McDaniel takes part in periodic reenactments of the Battle of Parkers Crossroads, but as a mere private, letting someone else play the part of Forrest. “I don’t want to be in charge of things,” he says.

He described Forrest as a “natural born military tactician,” who deserved recognition for his feats, though “he gets weighed down by other things.”

Among those “other things” are the fact that Forrest was a slave trader in Memphis before the war, was accused during the war of a massacre of surrendering black Union troops at Fort Pillow, and was Grand Dragon of the newly formed Ku Klux Klan after the war.

McDaniel did not discuss those matters directly during his luncheon remarks, but in the interview afterward alluded to the last charge.

After repeating that Forrest was a “natural born military tactician" and suggesting that “people ought to focus on the positive,” McDaniel said, “This other activity that he got involved in, once he saw what was bad about it, he disbanded it….You can find something bad on anybody We wouldn’t agree with what he did after the war, but he did a lot of good things.”

McDaniel rushed one version of the Heritage Protection Act through the legislature in 2013 in an effort (too late as it turned out) to prevent the Memphis City Council from changing the names of three downtown parks with Confederate associations, including Forrest Park (now Health Sciences Park).

In 2016, he successfully sponsored a stronger version of the Act, mandating that a change in the status of monuments can only be approved by a two-thirds vote of the 29-member state Historical Association. The City of Memphis will seek a waiver from that body when the Association next meets in Nashville in October.