Another Big Shoe Drops with Lane's Entry in Sheriff's Race

Close on the heels of Democratic candidate Floyd Bonner’s kickoff of his campaign for Sheriff two weeks ago at the Racquet Club, another big shoe dropped last Thursday when county Homeland Security director Dale Lane, a leading Republican candidate for trhe office, had his own kickoff affair in Millington.

Lane’s was a homier affair, held at the Mid-South Auction Group & Marketplace in Millington, but, like current chief Deputy Bonner, who was endorsed by his boss, outgoing Sheriff Bill Oldham, Lane had some bigtime backing, too. His came from County Mayor Luttrell, who served two terms as Sheriff himself before his election as Mayor in 2010.

An obstacle to Lane’s announcement of the Luttrell endorsement was the fact that the Mayor had been in Nashville and was still en route back to Memphis. That logistical problem was solved via some everyday technology: Lane got Luttrell on his cell phone and had him speak to the assembled crowd by holding the phone to a microphone. 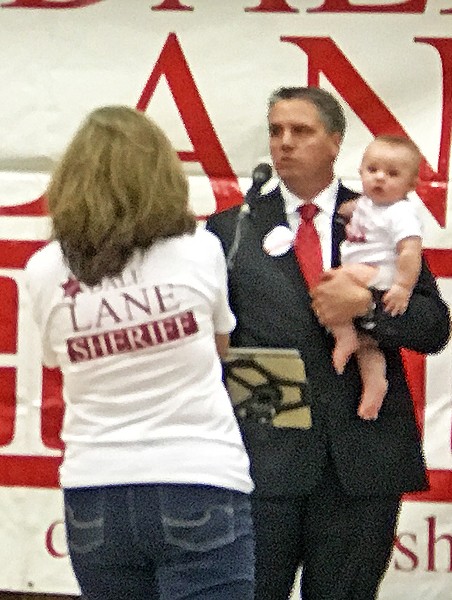 Luttrell noted the candidate’s impressive credentials, which included several important command positions, including that of chief inspector of the Department’s patrol division and supervision of the Department’s swat team and its training division.

And finally, the Mayor said, Lane had served “as our point person in Shelby County,” as director of preparedness and Homeland Security.

In his own remarks, Lane, a devout Christian, made a point of proclaiming, as he always does in his public appearances, the chief importance in his life of his faith and his family. He reminisced about having begun his law enforcement career 30 years ago as a member of the Millington police force.

Lane said one of his chief preoccupations as Sheriff would be that of youth violence, for which he proposed a multi-layered approach involving partnership with the faith-based and business communities, intervention via youth activities, and direct suppression, by means of street-level enforcement.