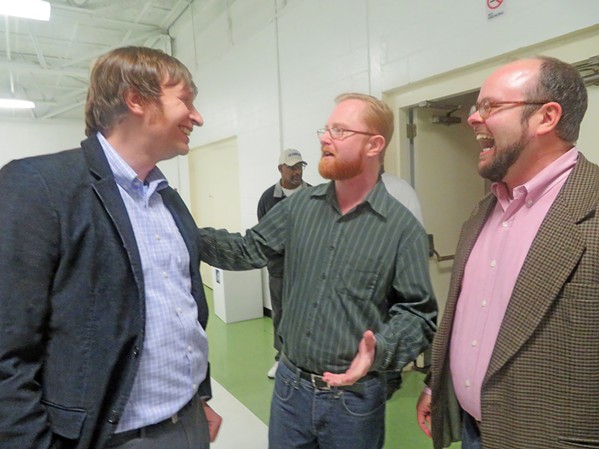 For local Democrats, the timing worked out pretty well for Thursday night’s well-attended party Meet ‘n Greet at the Association Federation of State, County, and Municipal Employees union building on Beale. This was the week, after all, when Democrats on the national level won important elections in states like Virginia and New Jersey.

And the presence at the event, which was co-sponsored by AFSCME AND the Tennessee Democratic Party, of ranking party officials at the local, state, and federal levels could not fail to reinforce the sense of a renascent political organization (the Shelby County Democratic Party was reborn recently after a year of enforced decertification).

All the speakers, clearly encouraged by the week’s electoral successes, were, in the lexicon of the Obama era, fired up and ready to go. Harrison paid tribute to Shelby County as “the heart of the Tennessee Democratic Party,” but, as he also noted, in candid acknowledgement of past under-achievements and setbacks, “there have been some problems with the heart.”

All that could change, Harrison said, echoing previous upbeat remarks by Strong and Mancini. Like them, he foresaw an energized party effort behind a new crop of Democratic candidates for major offices like Governor and Senator, as well as for legislative races and key local offices like Sheriff and Shelby County Mayor.

Reinforcing that prospect were a goodly number of local candidates in attendance, including Chief Deputy Sheriff Floyd Bonner (now aiming for the top job with an endorsement from current Sheriff Bill Oldham) and state Senate Minority Leader Lee Harris, who now seeks the office of County Mayor.

There were enough local officials and candidates fora variety of offices on hand that listing them all would incur the same difficulty that afflicts Academy Award winners at thank-you time on stage. The impressive thing about the turnout was that, besides the candidates running in the inner city for seats customarily held by Democrats, there were an unusual number of political newcomers on hand seeking to displace Republican incumbents in the suburbs — a la state Rep. Dwayne Thompson of District 96, who turned out an over-confident GOP predecessor last year.

Not bad as a warm-up event for the political battles of 2018.