Filling in the Blanks

Gubernatorial candidate Bill Lee’s platform for Memphis remains somewhat inspecific, but he’s got a start on it. Meanwhile, he's wasting no time putting his local network together. 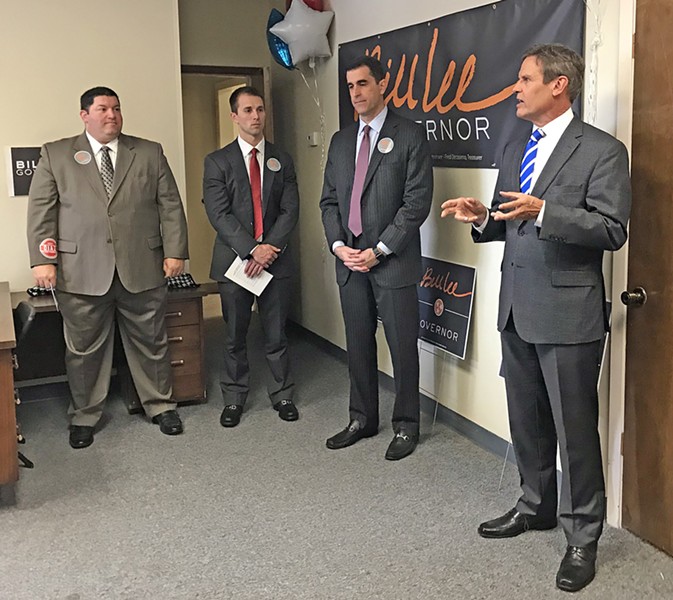 Some weeks ago, the gubernatorial campaign of Nashville businessman/farmer Bill Lee sent out to local media — and presumably to some households and relevant institutions — a list detailing his plans for this area under the heading “Commitment to Memphis and Shelby County.”

This was before Lee had held any major public events locally and before the completion of his 95-day tractor ride, which occurred roughly at the time of last month’s gubernatorial forum here sponsored by the Federation of Republican Women and featuring Lee and the five other GOP candidates for Governor. At that event and at an earlier informal meeting with local citizens at a Millington pizza parlor, Lee demonstrated an easy way with voters and a persuasive manner on the stump.

What he didn’t do then — and still hadn’t fully done as of Wednesday, when he held a Memphis headquarters opening on Poplar Avenue across from Memorial Park — was dot all the ‘i’s” and cross the “t’s” on his platform for Memphis. He has made a start on it, however.

What the Commitment does contain (and printed copies of it were available at the newly opened headquarters) was promises of gubernatorial action beneficial to the local area in 10 specific categories. What it doesn’t do, in most of the indicated areas,  is spell out exactly what that action will be.

The nearest parallel to Lee’s itemized list was one made by then gubernatorial candidate Phil Bredesen at a meeting of the Memphis Kiwanis Club in the Skyway of The Peabody. Bredesen, at the time still serving as Nashville’s mayor, was explicit about his intentions. Among his pledges were one to create an independent Board of Trustees for the University of Memphis (something accomplished only recently by Governor Bill Haslam), another to develop the riverfront, and another to aggressively seek NFL status for Memphis. The rest of his list contained concrete proposals, too — sometimes in depth.

Bredesen would not carry Shelby County in that year’s Democratic primary — not with County Mayor Bill Morrisk, a local favorite,  as an opponent — and he also lost the county in the general election to another homeboy, then 7th District congressman Don Sundquist, running as a Republican. But he impressed a lot of people that day at The Peabody and won attention that stayed in people’s memory for eight years later, when he did get elected Governor. (With Governor Sundquist’s help, he had meanwhile landed that NFL franchise — for Nashville.)

It is not a slam on Lee to point out that his list deals mainly with abstract concepts and lacks Bredesen-style specifics. It is, after all, what it says it is: a commitment, and presumably he will have the opportunity later on to fill in the blanks. Meanwhile, his suggestions for action in buffing up law enforcement, attacking the opioid-addiction problem, and expanding workforce development and local infrastructure are certainly headed in the direction of concrete action. (For those interested, the “Commitment to Memphis and Shelby County” is reprinted at the bottom of this article.)

What Lee did do quite specifically on Wednesday was indicate something about the kind of support he will command in Memphis. Among the people playing key roles for him locally will be attorney Lang Wiseman, a former Shelby County Republican Chairman. Others will be Horace Tipton as Shelby County field director. “County captains” will include well-known activists Karyn Dunavant, Elaine Ervins, and Rieta Selberg. It is an impressive group, and one augmented at Wednesday’s meeting by former Tennessee Republican chairman Chris Devaney, who will serve as a campaign manager.

Considering the credentials of his helpers and and some other clear signs of professionalism in his campaign, Lee is clearly going to be a serious contender for the Republican nomination. He promised on Wednesday that he would be a frequent visitor to these parts, and almost certainly he will choose to flesh out more of his ideas for Memphis and Shelby County in the course of visits here over the next few months.

Here is the text of his “Commitment to Memphis and Shelby County”:

My vision is for Tennessee to be a leader in this nation, and in order to do that we need every part of our state to fully realize its potential.

Our next Governor must make a demonstrated commitment to ensuring the success of the entire West Tennessee region, and in order to do that we need a strong, vibrant and growing Shelby County. While Memphis and Shelby County face their own unique set of challenges, I am deeply impressed by the commitment, energy and vision of a broad range of community, business, and civic leaders I have been privileged to meet. Those leaders and all of the citizens there are working tirelessly to lift up their community, and they deserve a Governor who will be a true partner in their efforts. I will be that Governor.

Here are ten commitments I’m making to Memphis and Shelby County that I’ll keep when I become governor of Tennessee. Please let me know what you think here.

3)I commit to working with local leaders to find tailored solutions for the challenges of Memphis and Shelby County.

No one knows Memphis like Memphians. Whether it’s education or economic development, there are no one-size-fits-all fixes, and my administration will understand that just because some things work for Nashville or Knoxville does not mean they are the right fit for Memphis. The state must support and align itself to the local vision, not supplant it. As Governor, my goal will be to support and enhance the local efforts that are working.

4) I commit to a regional approach for economic development that ensures West Tennessee is competitive with Arkansas & Mississippi.

We must make sure Shelby County is a key part of our plan for the West Tennessee region. As a border county, Shelby County suffers greatly from a burdensome tax code that makes it harder for businesses to stay. Businesses that move from Shelby County to Mississippi can see a substantial reduction in their franchise and excise tax-rate, of which Tennessee’s is the highest in the region. We will renew our focus on improving the environment for businesses in this state, recognizing that keeping and growing a business here is just as valuable as recruiting a business in from out-of-state.

5) I commit to supporting the comprehensive education reform efforts taking place and will continue to invest in ideas that work.

Shelby County has been a leader in locally-driven innovations to provide teachers with more flexibility, principals with greater autonomy, and students with more quality options. We will support and accelerate local efforts, working towards a system that will provide high-quality options for every parent in Shelby County.

6) I commit to true workforce development, making vocational, technical, and agricultural training a priority in public schools across Tennessee.

I employ 1,200 skilled tradesmen in my company, and we had to create our own training school to fill a dire need for vocational education as a state. The fact is, as a nation, we have neglected vocational education, leaving out a crucial ingredient for a healthy economy. If we want to keep jobs from leaving Shelby County, we’ll need to ensure that every student has the opportunity to explore and achieve their productive potential.

To do that, I will work with our private sector allies to provide training opportunities for more vocational education instructors, expanded apprenticeship opportunities for students, and invest in the critical technology our schools need to prepare for 21st century jobs.

7) I commit to engaging the faith community to bring their strengths to the public square to help address our state’s most important challenges.

Shelby County has a rich tradition of faith-based and non-profit charitable institutions leading community efforts. Our state government shouldn’t attempt to replace or dictate solutions without them. Instead, we should acknowledge the important role of faith and non-profit leaders and give them a seat at the table. So whether it’s a prison ministry, such as Men of Valor helping adults become leaders in their community, or a private-public partnership such as ARISE2Read supporting the next generation of literacy, we can and we should work with our faith leaders to deliver real results.

8) I commit to give law enforcement and prosecutors the support and resources they need to protect public safety.

A 600 officer shortage and an increased caseload for prosecutors makes the mission of law enforcement in Shelby County much harder than it should be. But in facing this challenge, Memphis and Shelby County leaders have managed to come together and do more with less, developing technologies and expertise that have helped in times of crisis. I will commit to making the investments necessary to ensure our law enforcement professionals have the tools they need to keep Tennesseans safe.

9) I commit to fighting the opioid epidemic with every tool at my disposal, including addiction treatment where appropriate and harsh punishments for drug dealers.

As we continue to rein in a system that allows for the over-prescription of opioid drugs, we are facing a new threat: New synthetic opioids that are exponentially more fatal than any prescription painkiller. Drug traffickers that come through Shelby County put the whole state at risk and bring crime and death with them. We will get behind our law enforcement and make Tennessee a state that drug traffickers fear, doing everything in our power to keep them out of Shelby County and our state.

10) I commit to help Memphis and Shelby County continue to build a world-class infrastructure that supports its economy and maintains its status as a national distribution hub.

From increasing the number of routes at Memphis International to executing the long-term vision for the Port of Memphis, we must continue to support infrastructure in Memphis as Tennessee’s gateway to the world. We can lead the nation in logistics and distribution, creating job opportunities and efficiencies for every Tennessean, but to do so we must continue to invest and build on the strategic assets of Memphis.