Even as various local Republicans hanker after the stat 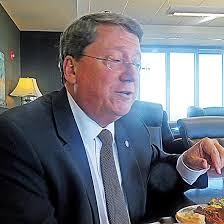 e Senate seat of current Senate majority leader Mark Norris, doubts are arising as to whether the seat, presumably due to be vacated when Norris becomes a federal judge, will actually come open.

Although Norris’ judicial nomination, made last year by President Trump, has been approved on an 11-9 party-line vote by the Senate Judiciary Committee, Norris was not included in a confirmation vote by the full Senate this week that saw two other Trump nominees approved — Memphis lawyer Tommy Parker, a former assistant U.S. district attorney, for a seat on the U.S. District Court for West Tennessee and Nashville lawyer William “Chip” Campbell for a U.S. District Court of Middle Tennessee position.

So Norris was back at the same old legislative stand this week as the General Assembly convened in Nashville, still functioning as majority leader, in which partisan role he told his fellow GOP Senators they should be “putting our best foot forward and telling people all the good things we’ve done.”

As for his judicial future, Norris dropped hints that he could ultimately fail of confirmation, a prospect due to his record of having espoused in Nashville hot-button conservative positions on issues like immigration, Photo ID requirements for voting, and a series of measures relating to LGBTQ rights.

Norris, who told his fellow Senators, “Y’all may be stuck with me for a while,” was quoted by the Tennessee Journal as saying he had felt “crucified for the sins of others during his Judiciary Committee hearing” and that he had doubts he could command the full component of 51 Republican votes in a final showdown vote on his confirmation.

For the record, in any case, President Trump formally re-nominated Norris this week, a parliamentary action required because the Senate had recessesd last year without voting on him.

But the Senator may not have enjoyed the fact that Trump, speaking in Nashville this week to the Tennessee Farm Federation, garbled his name by referring to him from the stump as "Mark Morris, state Senate Majority Leader."