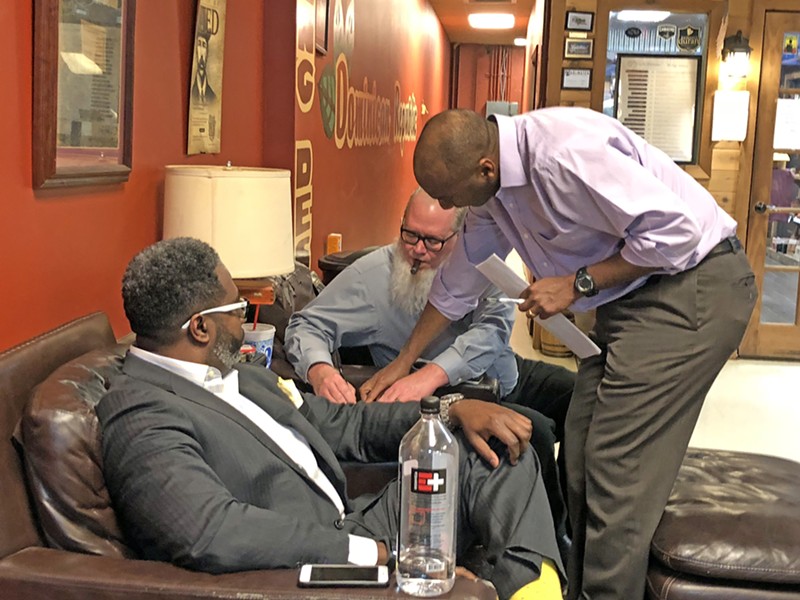 With the filing deadiine of noon, February 15, bearing down on them, candidates in  various races of the 2018 political season are doubling down on getting their qualifying petitions signed by potential voters, In some cases, the candidates have long since amassed enough signatures to satisfy the Election Commission’s requirements of 25 bona fide voters, living in th candidate’s district... They continue because the petition-signing party, something of a novelty on the political scene, is yet another way to engage a group of voters, spread the candidate’s message, and press the flesh. Other candidates are just trying to fill their quota of 25 before it gets too late.

Two such events were going on Thursday night in Shelby County. Lee Harris, candidate for Shelby County Mayor, was having a petition-signing party at the Burning Desire Cigar Emporium on Highway 64 in Lakeland. And John Boatner, who seeks the Democratic nomination and a chance to unseat GOP 8th District Congressman David Kustoff held one at the bar of Owen Brennan’s Restraurant on Poplar Avenue.

Harris, currently serving as a state Senator and as the Democrats’ Senate leader, has found it convenient to schedule such events for Thursday evenings. They become a first stop on his way home from a work week in Nashville. And both Harris, whose would-be constituency is the entire county population, and Boatner, who is running in a sprawling multi-county district, find it convenient to create an ad hoc space for petition signing as an alternative to (or addition to) door-to-door knocking to find potential voters.