Shelby GOP Does Another Lincoln Day, With a Few Differences

Boyd and Black supporters spar, and Corker keeps his own counsel about a possible re-entry into the U.S. Senate race.

As usual, the ballroom of the University of Memphis Holiday Inn on Saturday was filled to capacity for this year’s version of the Shelby County Republican Party’s Lincoln Day banquet. But, in what is shaping up as a year of serious competition in GOP primary races, there were some interesting deviations in party harmony.

A couple of them came from the event’s keynote speaker, U.S. Senator Tim Scott of South Carolina, who told an odd joke that was probably meant affectionately but came off, no doubt inadvertently, as seeming to be at the expense of U.S. Rep. Diane Black, who had introduced him and whom Scott had acknowledged to be a friend.

The joke’s beginning was itself inauspicious. Scott began to describe a “dream” in which U.S. Senator Bob Corker, U.S. Rep. Marsha Blackburn, and Black had all died the same day. As “big shots,” they were all instructed by St. Peter about the special rules of Heaven. Corker, caught trying to turn a real estate deal, was the first to be charged with a transgression.

The Senator ended up being chained to Democratic Senate Leader Chuck Schumer as a punishment, while “a voice that sounded like thunder” proclaimed: “Bob Corker,you have broken the rules of Heaven, and this is your punishment, for all eternity!”

Next, Blackburn was chained to House Democratic Leader Nancy Pelosi for some obsure misprision, and the same voice thundered, “Marsha Blackburn,you have broken the rules of Heaven, and this is your punishment, for all eternity!”

Then the clincher. In the dream Scott saw Rep. Black chained to Super Bowl quarterback Tom Brady, and, inevitably, the thunderous voice began to sound again: “Tom Brady, you have broken the rules of Heaven….” Etc., etc.

That quirky knee-slapper was followed immediately with a sentimental recollection by Scott, an African-American and the first Republican of his race to be elected to the Senate from South Carolina, of his grandfather’s being enabled to cast a vote for Barack Obama as the first African American to be elected President. The fact that Obama was a Democrat apparently compelled the Senator to tell the Republican audience, “Of course, I canceled his vote out.”

All of that was the fun stuff. But there was some intra-party dissension for real, in the course of the evening — some of it stemming from the fact of Black, one of several Republican candidates for Governor, being asked to introduce Scott, whose presence she had been helpful in arranging.

That didn’t sit well with the camp of at least one other candidate, former state Economic Development Commissioner Randy Boyd. According to several accounts, Chip Saltsman, Boyd’s campaign manager, confronted County Republican chair Lee Mills, impresario for this year’s Lincoln Day affair, and upbraided him for what the Boyd people saw as giving Black an unfair advantage. Saltsman allegedly used the ‘p’ word.

Meanwhile, Boyd’s press aide, Bonnie Brezina, got into something of a tangle with Shelby County Commissioner Terry Roland, a candidate for County Mayor who had purchased three tables at the banquet for friends and supporters. According to Roland and others, Brezina attempted to claim one of the tables, close to the dais, for Boyd and supporters, and an argument ensued before she relented.

Saturday was otherwise a good day for Boyd, Saltsman, and Brazina, who opened up a Shelby County headquarters for the gubernatorial candidate in the same Poplar Plaza space that had been used by Jim Strickland in his victorious 2015 race for Mayor. On hand for the affair were such supporters as Shelby County Mayor Mark Luttrell and two new Boyd endorsers, Germantown Mayor Mike Palazzolo and County Commissioner David Reaves, all three of whom delivered extended statements of praise for Boyd.

Another candidate who did a previous event in Memphis before attending the Lincoln Day festivities was Beth Harwell, the Speaker of the state House of Representatives. At the request of former Memphis Mayor A C Wharton and Shelby County Defender Stephen Busch, both principals of the Adverse Childhood Experiences Foundation, Harwell went to the South Memphis headquarters of the Foundation to discuss with them the Foundation’s activities in mitigating the effects on children of adverse experience early in life.

From a news-media point of view, the dominant point of interest at Lincoln Day was the chance to ask Senator Corker about newly prevalent rumors that he is reconsidering his previously expressed decision not to run for reelection. To several reporters individually, and to a whole scrum of them after the banquet, Corker said he had nothing new to say about the matter and disclaimed any adverse feeling about either Rep. Blackburn, who has become the obvious frontrunner in the GOP primary, or “the Democrat running,” former Governor Phil Bredesen. 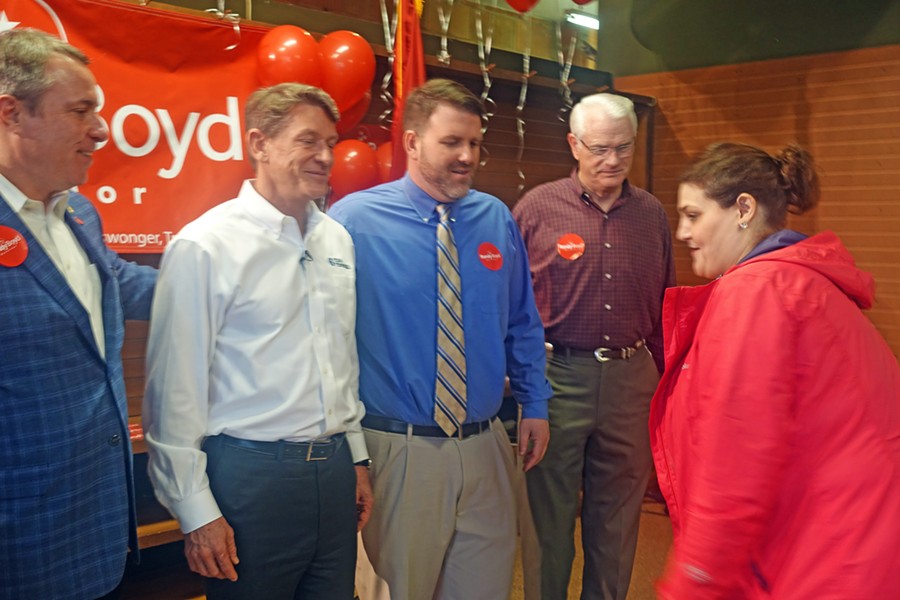