Keeping Score in Strickland's Tent at the Barbecue Fest 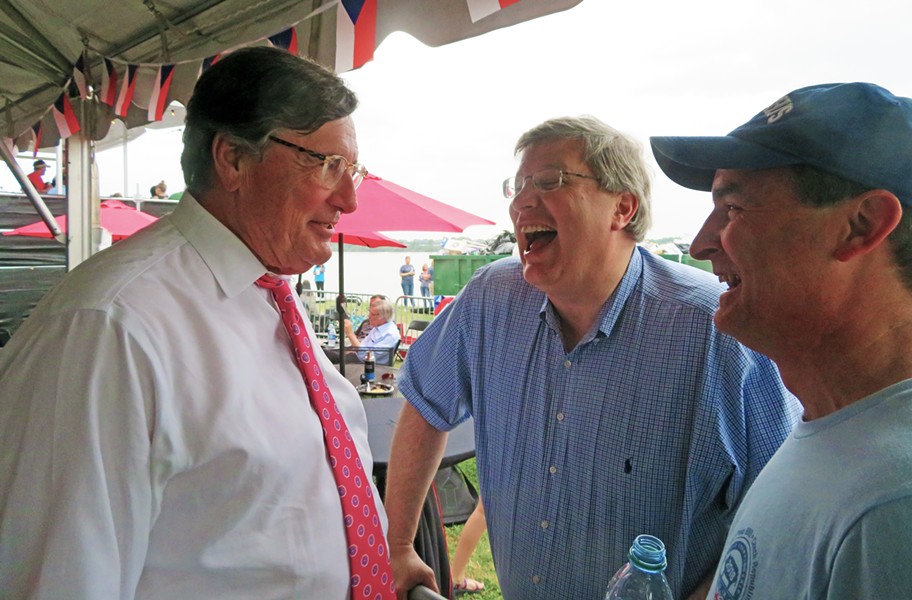 The annual Memphis Barbecue Festival is under way downtown, and, as usual, the city’s chief executive — these days it’s Jim Strickland — opened things up on Wednesday night with an opening reception at the big mayoral tent, which, by tradition, was the first hospitality tent on the south end of Tom Lee Park, closest to the Beale Street.

The whole repertory of barbecue — mostly the several varieties of pork but including some chicken and spaghetti — was laid out on serving tables, along with beans, slaw, and dessert fixings. And, as the evening went on, the menu expanded to include an impressive number of movers and shakers on hand to sample the wares, guzzle the beer, wine, and sodas, but mainly just to schmooze and — this being an election year — to see and be seen.

A conspicuous visitor was Craig Fitzhugh, there in tow of some of his staffers — notably consultants Matt Kuhn and Mike Lipe. Fitzhugh was still riding a high from the gubernatorial debate the night before at Nashville’s David Lipscomb College, where he’d blindsided Democratic rival Karl Dean with an unexpected verbal thrust charging that Nashville’s mayor had, at the time of the capital city’s devastating 2008 flood, violated “public trust” by draining some $7.4 million from the HUD disaster relief fund extended to the city, in order to build the Ascend Ampitheater downtown.

During the Tuesday night debate, which for the most part had seemed the usual neighborly forum, with platitudes and candidates’ talking points predominating, Dean demanded time to respond and sputtered out something about how the indicated funds had instead been used for “flood mitigation.” By the next day, Dean rallied with a developed email explanation from his campaign manager Courtney Wheeler, the kernel of which was this:

“Let’s settle this right now with some facts: After the flood, the city received $33 million from a Community Development Block Grant. These funds were in addition to $87.1 million in FEMA assistance and $117 million Small Business Administration (SBA) loans for individuals and businesses. The city set up disaster information centers to help make sure people were applying for all of the assistance they were eligible for.

“Three years later, long after people had stopped turning in applications for assistance, Karl and the Metro Council repurposed $7.1 million of remaining grant money to mitigate against future floods and help our city’s economy fully recover with the redevelopment of Nashville’s west riverfront. This decision was vetted and approved by the Metro Council, MDHA, and HUD through a transparent, public process. As part of the project, the city built a below-ground seepage cut-off wall along the length of Nashville’s West Riverfront Park (where the amphitheater sits). This infrastructure fix slows down the movement of underground water and helps decrease the impact of future floods.”

Meanwhile, Fitzhugh press aide Trace Sharp had put out an email as well, this one extending the original attack:

“With all due respect, building a riverfront attraction with disaster relief does not fit my definition of fiscal responsibility,” said Minority Leader Craig Fitzhugh. “I was disappointed to hear how the Dean administration abandoned flood victims in order to divert over seven million dollars in disaster relief to corporate cronies, contractors and consultants who had cozy relationships with the administration.”

“These funds were specifically designated to help 2010 flood victims with down payment assistance, rehab assistance and neighborhood clean-up. 52 counties across West and Middle Tennessee were declared federal disaster areas, including rural areas like Lauderdale County where I am from. There were homeowners who needed help and didn’t get it, people who drained out retirement accounts waiting for help that never arrived.”

However the argument gets disposed of in logical terms, it is serving the purposes of Fitzhugh, who, by his own and well as others’ reckoning, had been having difficulty making headway against his better-financed and larger networked Democratic rival.

Discussing the matter in Strickland’s tent on Wednesday night, Fitzhugh and his aides were downright giddy with excitement. “We had to do something to make a fight of this, and this is an issue,” said the candidate.

The other memorable moment from the Lipscomb debate, subject of a fair amount of chatter in Strrickland's tent,  had come when the five participating candidates — Democrats Fitzhugh and Dean and Republicans Beth Harwell, Randy Boyd, and
Bill Lee — were given a “lightning rod” question asking them to specify whether the public anti-gun campaign of the Parkland high school students after the massacre there had been ‘positive” or “negative.”

Everyone answered “positive” except for Lee, whose answer of “negative” was clearly meant to maintain his standing with Tennessee’s Second Amendment constituency. Recognizing in the aftermath that he might have sounded Scrooge-like in his answer, Lee also went the email route, thusly:

“FRANKLIN, Tenn. – Tonight, Republican gubernatorial candidate Bill Lee released the following statement after tonight's Leadership Tennessee Gubernatorial Forum that showed a clear contrast with other candidates about gun rights in Tennessee:
“This is common sense: law abiding citizens should not be punished for the actions of criminals. These kids have been through a horrible tragedy. But I’ve been sickened by how the liberal media, the teacher’s unions and the far left lobby have used these kids as props to push their anti-gun agenda.”


Whether the Franklin businessman had thereby dug himself in deeper or solidified his support with the gun crowd remains to be seen. Most of the reaction among the revelers in Strickland's tent was on the downside.

Festivities got underway Wednesday night at the traditional mayor's tent located closest to Beale on the Tom Lee Midway.