After a stormy day of arguments and protests over the location of voting sites for the August 2 election round, the Election Commission and its critics find possible light at the end of the tunnel. After a stormy day of arguments and protests over the location of voting sites for the August 2nd election round, the Election Commission and its critics found possible light at the end of the tunnel.

A mushrooming controversy regarding the Shelby County Election Commission’s provision of a new Early Voting schedule for the August 2nd election round was taken up — and perhaps put on a path to resolution — by the Shelby County Commission on Wednesday, shortly after a press conference in the Vasco Smith County Building by Shelby County Democrats, who denounced the changes.

The Democratic contingent, spearheaded by county party chairman Corey Strong and state Young Democrats president London Lamar, summed up several days of simmering resentment, charging that the majority-Republican EC was catering preferentially to the GOP by the selection of the Agricenter in East Memphis as an umbrella site for for extra days of early voting. Previously that role had been bestowed on a downtown site, more accessible to residents of the inner city.

An additional focus of the Democrats' displeasure was the EC’s decision to add five new early voting sites to those previously advertised and employed for the county primary elections in May. As Strong would say in later testimony to the County Commission, three of the new sites were in strongly Republican areas, one was in “purple” territory, neither Democratic nor Republican, and the fifth was “a bone thrown to us” in South Memphis.

Yet a third point was at issue — a rumor that early voting sites in the eastern — or GOP-oriented — portions of the county had been provided with newer, more user-friendly election machines and materials than those provided for the inner city.

On that final point, for which no evidence had been presented, the answer given convincingly in a later ad hoc session of the county commission by several different sources, including Norma Lester, one of two Democrats on the Election Commission, was that all voting sites were provided with election machines of the same model and vintage. (There was further uniformity, seconded heartily by Republican Commissioner Terry Roland, that all the machines had reached the end of their life cycles and would be due for replacement in the near future.)

The other issues were not resolved so easily. Both Robert Meyers, the Republican chairman of the Election Commission, and election administrator Linda Phillips said that the newly added voting sites were chosen for the convenience of previously underserved areas and that the Agricenter, in Shelby Farms, was selected as an umbrella site, open for four more days than the other sites, because of its centra location in Shelby County. 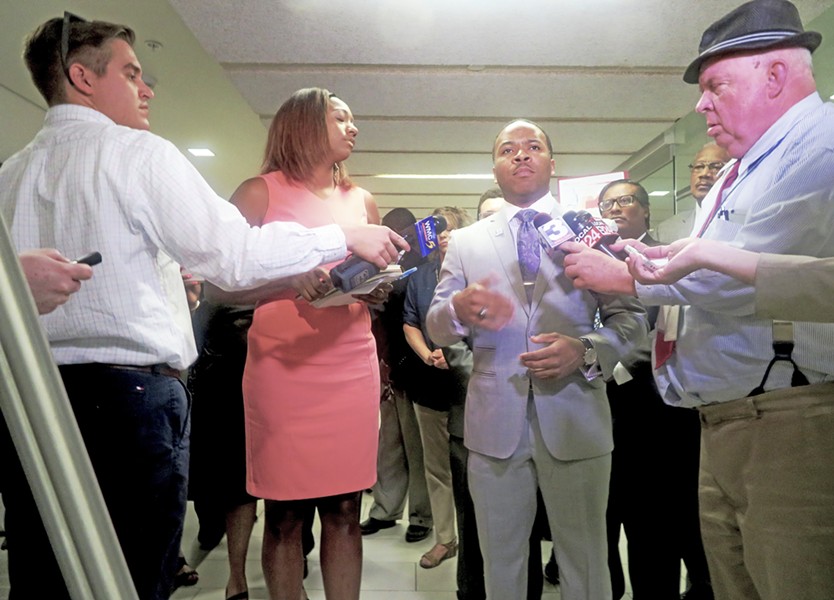 Democratic members of the audience and of the county commission (which had and has no prescribed oversight of the EC, serving only a referee function on Wednesday) were skeptical, pointing out, for example, that the Agricenter site is not served by public transportation, a fact making it inconvenient for certain classes of working people.
After a fair amount of to and fro in argumentation, there seemed to emerge a consensus that changes could yet be made in the provision of sites for early voting, due to start on Friday, July 13th, and to end on Saturday, July 28, at 26 locations.

Complicating that search for consensus had been some evident contradictions, perhaps incidental or unintentional ones. Just before the commission convened for what would turn out to be its ad hoc session on the site issues, county election administrator Linda Phillips was asked who had made the determination on the location of the new sites.

Another, more fundamental contradiction seemed to emerge from Meyers’ testimony before the county commission. In his explanation of the logic that went into the site selection, he said that pin-pointing previously underserved areas was the only criterion and that, specifically, questions of partisan orientation had not figured in the selection.

In later testimony, however, responding to suggestions from county commissioners, as well as audience members, that most of the newly added early-voting sites were in Republican areas, Meyers went down the list of preexisting sites and identified them by party, with most of those he mentioned being Democratic rather than Republican, then said that all the Election Commissionsion had done was to try to provide some “balance.”

In any case, all may end well. Two proposals for remedying the situation were made — one to make all sites open on the same days and for the same time intervals; another to assign a more central site the same extra days and hours as those now provided for the Agricenter, so that two sites would be available for extra days and hours. Mississippi Boulevard Christian Church, on Bellevue Boulevard in Midtown, was one suggestion for the second site.

To judge by the applause that greeted the all-sites-open-all-days proposal, that was the audience favorite. County Commissioner Reginald Milton further proposed that 11 o’clock starting times be moved back to 10 a.m.

Democratic Election Commissioner Lester, who had been the only member absent when the commission voted 4-0 to approve the new sites, quickly said she would call for an Election Commission meeting, and Meyers agreed to set one on an ASAP basis. (Lester said Wednesday she would have opposed the designation of the Agricenter as an umbrella site but praised administrator Phillips as an objective, unbiased official.)

And that soon-to-be special session of the Election Commission is where the next move in the Early Voting matter will occur, and where the controversy will be resolved. Or not.