The Scramble for Position

July 01, 2018
2 comments
**The Shelby County Republicans’ Master Meal (this year re-christened as “Reagan Day Master Meal) went off as usual at the Great Hall of

Germantown on Thursday night, but this year, the event, which featured state treasurer David Lillard as keynoter, was characterized by an unusual omission. Despite the presence, at the front of the mammoth hall, near the dais, of two life-sized cutouts, one of the Great Communicator and another of the current president, the event featured no mention — that’s zero mention — of Donald J. Trump, the POTUS. Well, there was one mention, technically, when Lee Mills, chairman of the Republican Party of Shelby County, informed the several hundred arriving celebrants they could, if they chose, be photographed with either of the two cutouts, After that, nada — not from Lillard not from two prior speakers, state Senator Brian Kelsey or state Representative Mark White.

Considering that the Master Meal is an annual party event rivaling the RPSC’s annual Lincoln Day banquet, usually held in February, that was downright unusual. Keynoter Lillard did brag of the fiscal achievements of “state government” (which is to say the Treasurer’s office, assisted by the GOP-dominated legislature) but did no boasting whatsoever of Trump, nor, for that matter, of Republican Governor Bill Haslam.

Outgoing County Mayor Mark Luttrell came in for some praise and was granted a curtain call for a farewell speech, but most of the rhetoric of the affair went toward praising the pedigrees and boosting the chances of the many local Republican office-holders and GOP candidates for reelection against challenges from what Kelsey acknowledged was a newly invigorated Democratic Party. Mayhap an omen in all this? Or merely an oversight?

**The Tennessee Nurses Association, local members of which gathered in Memphis at Coletta’s Restaurant in Bartlett earlier Friday evening to hear updates from Crystal Walker of the UT College of Nursing and TNA executive director Tina Gerardi, has been trying hard to have sit-downs with each of the six major candidates for governor, hoping, among other things, to get endorsements for state-authorized Independent Practice for nurse practitioners. The TNA remains hopeful, despite being stiffed by the GOP’s Randy Boyd, Diane Black, and Beth Harwell, who have failed so far to arrange a rendezvous with TNA officials. The two Democratic candidates, Karl Dean and Craig Fitzhugh, have each indicated support for Independent Practice authority, however, and hopes were high at the Friday dinner for a positive encounter on Saturday with Republican candidate Bill Lee, who had responded eagerly to an invitation to meet with TNA members during his planned “Super Saturday” event on Saturday at his Shelby County headquarters on Poplar Avenue. Meanwhile, all the candidates have received copies of a TNA questionnaire, the results from which will at some point be publicized by the nurses’ organization.

Another guest of honor at the Tennessee Nurses Association bash on Thursday night was Sara Kyle, the District 30 state senator who, along with her Senate colleague Lee Harris (now a candidate for Shelby County Mayor), is on what can only be called a crusade to cast out yet another Shelby County senator, Reginald Tate of District 33, in favor of Democratic challenger Katrina Robinson. Tate’s sins are those of incessant collaboration with the Republican powers-that-be in Nashville, the fact of using important committee memberships — Education, Health & Welfare, Finance, Ways & Means, Judiciary — not for the aims and purposes of his constituents or party-mates but to advance Republican goals often regarded as antithetical to his District 33 base. In an effort to propitiate the ire of his fellow Democrats, Tate resigned his long-term affiliation with ALEC (American Legislative Exchange Council), the Koch-brothers-funded source of arch-Republican legislation, but allowed himself to be captured, on-mic, at a recent TV appearance as calling himself a “black Republican” and denouncing Democrats as “full of shit.”

Worst of all, Tate made no effort to oppose the legislative action to withdraw a previous $250,000 grant to Memphis for its 2019 bicentennial celebration as punishment for the city’s taking down Confederate statues in time for this year’s April 4th commemoration of Martin Luther King events, just as he had made no effort to oppose the Norris-Todd bill of 2011 that resulted in the sundering of a merged city/county school system and the creation of breakaway school districts in each of Shelby County’s suburban municipalities.

Ironically, Tate had scheduled his headquarters opening at 3556 Mendenhall for Saturday afternoon, at the same time that Republican gubernatorial candidate Bill Lee was having a “Super Saturday” bash at his headquarters at 5576 Poplar.

Though the word “Democrat” does not appear on the senator’s signage at his new headquarters, neither does the word “Republican.” Tate did, in fact, have some identifiable Democrats at the opening, and, when he was asked about the public disaffection from him of fellow Senate Democrats Kyle and Lee Harris, he handed out a flyer listing various benefits to Shelby County which he said were results of his Senate tenure, and he suggested that the coolness to his candidacy of various Democrats owed more to their envy of his achievements (alternatively, of his legislative committee assignments) than to any partisan apostasy on his part. **As for the aforementioned gubernatorial candidate Lee, he had several members of the TNA at his “Super Saturday” affair (which was to have included some door-to-door campaigning in nearby locations, that had to be postponed, pending a break in some sudden rain showers).

Neither his questionnaire nor those of his gubernatorial opponents have as yet been received and tabulated by the TNA, but candidate Lee made a point of acknowledging his support for one of the key wish-list items wanted by the nurses’ association, legislation enabling independent practicing authority for nurse practitioners. One of his auditors on Saturday was TNA stalwart Connie McCarter, who pronounced herself pleased.
Another candidate for governor, U.S. Representative Diane Black, has invited members of the association to meet with her during the course of a CPAC event at FedExForum on Monday. **Even as most local political attention is fixed on the races to be decided in the state and federal primaries and county general election August 2nd, Memphis Mayor Jim Strickland made a major move to ready his reelection campaign for the city election of 2019. Strickland, who has been steadily been holding campaign fund-raisers, scheduled his most recent one for Tuesday of this week at the Beale Street Museum and Studio of the late Ernest Withers, the late revered photographic chronicler of the Civil Rights Revolution.

The crowded affair, at a minimum of $150 a head, drew a Who’s Who of influential black businessman and civil eminences, and suggested good tidings in 2019 for Strickland, whose 20915 upset victory over then Mayor A C Wharton, involved the draining away of significant African-American votes from Wharton. In his remarks to the group, Strickland did not fail to note that he had put himself on the line in the successful effort to buck state resistance in the removal of Confederate memorials downtown, that he had geometrically increased the amount of city contracts with black-owned businesses, and that he had addressed black voters’ concerns in numerous other ways.

It remains uncertain who Strickland’s opponents will be in 2919, though a former mayor, Willie Herenton, has proclaimed a wish to run, and Mike Williams, head of the Memphis Police Union, a fourth-place finisher in 2015, has already basically declared. Both are African-American. Strickland’s aim is clearly to stay a step ahead, and holding on to his impressive share of the black base is a key part of his strategy. 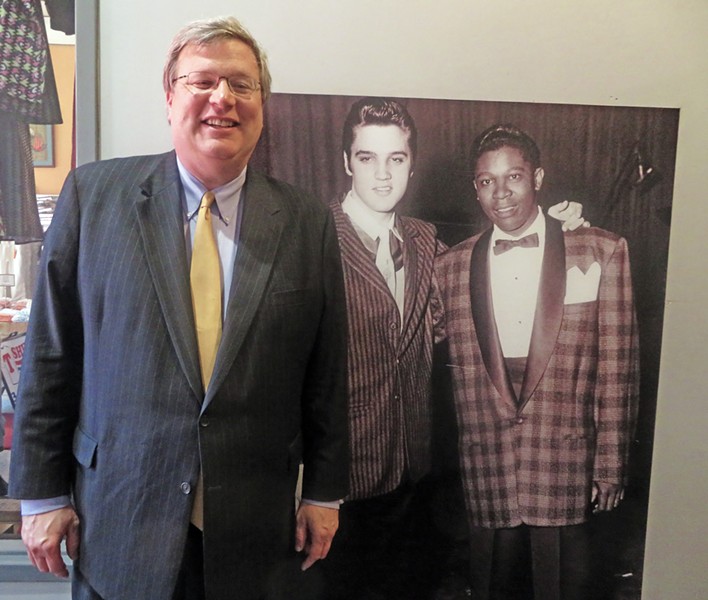