Diane Black Gets a Little Help from Her Friends

The gubernatorial candidate gets props in Memphis from Matt Schlapp, chairman of the American Conservative Union, and HUD Secretary Ben Carson, her co-panelist at a local meeting of the Conservative Political Action Caucus (CPAC).


When is a statewide political campaign also a natio nal campaign? Or perhaps that question is best turned around: How much do and should national 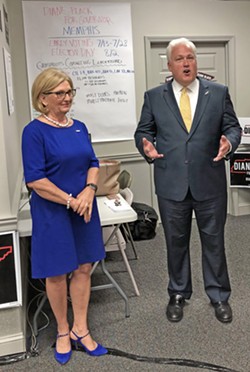 issues influence, or even become, the substance of statwewide campaigns?

The question is undeniably relevant to the current campaign for Governor of U.S. Representative Diane Black, a Republican who seems at times to be running a national campaign and who, perhaps not coincidentally, made Memphis appearances Monday in the company of Matt Schlapp, chairman of the American Conservative Union, and Ben Carson, secretary of Housing and Urban Development (HUD).

Schlapp, a familiar presence on national TV political talk shows, was at a Monday morning press conference with Black on Monday, where he endorsed her gubernatorial candidacy on behalf of the ACU, the nation’s oldest conservative lobbying organization, and Carson was a scheduled speaker, along with Black, at a Monday nighty panel discussion of the ACU’s Conservative Political Action Committee (CPAC) at FedEx Forum.

Schlapp said ACU had “been in the trenches” with Black for years, praised her work with the House budget committee, and avowed that there was “no better champion in the congress for our conservative values.”

Black reciprocated her pride in her high annual scores with ACU evaluations on issues and made the case that ACU values accorded well with Tennessee “core principles.” People from states like New york and California who come here and insist on less conservative concepts should be told, “that’s not how we do it here” and advised to “go back” to those states, said Black, who warned against Tennessee’s becoming a “purple” state like North Carolina next door.

During a brief meeting with local reporters, Black defended her solidarity with President Trump and her emphasis on such matters as immigration control at the nation’s southern border.

Issues like “sanctuary cities” and “in-state tuition” for illegals,” both of which she opposes, are important locally, Black said. “As Governor, I’d be responsible for making sure Tennessee is safe.” She added that her recent endorsements by the National Rifle Association and National Right to Life reflected the reality of these organizations’ issues as “concerns right here in our state.”

Asked about her showing in a recent Vanderbilt University poll, which gave her high name recognition statewide but included figures showing her unfavorable ratings higher than her favorable ones, Black answered, “What does the poll really mean? If you break those polls down, you see that they include liberals and moderates in there, and I’m obviously a conservative.”

She said it was “essential that I define who I am and what I’ve stood for over the last 20 years. I’m conservative, and I get things done.” She rejected opponents’ charges that she was a “career politician” and said, “What I really am is a career nurse,” as well as “a businesswoman, an educator," and someone vitally interested in public policy. “I’m a very well-rounded person,” she said.

More than any of her GOP primary opponents, including former state Economic Development Commissioner Randy Boyd, who has called her “D.C. Diane” Black identifies with President Trump, who has returned the favor by praising her, especially for her work as House budget chair.

“Tax reform and GDP growth. I’m very proud of that,” Black said. “The President has vision and is a strong negotiator.” She was somewhat more conditional on the subject of the President’s recent announcement of tariffs against American trading partners. “That’s something you don’t do when there’s no problem,” she said, mentioning the state’s agricultural producers as being potentially vulnerable to retaliation.

“It could be difficult if it’s not done in a fair way,” she said of the new Trump hardline on tariffs. “But he is one who bargains and bargains well.”

Black would appear twice later on at the CPAC meeting, held in the lobby of FedEx Forum, first with both Schlapp and Carson in a panel in which she and the HUD secretary made much of their Horatio Alger-like rise from youthful poverty (both, as they told it, having been raised in public housing) and later, in a concluding panel with Schlapp, in which Black underscored her pro-life credentials and the two of them led what was by then a much-diminished crowd in a valedictory pledge-of-allegiance to the flag.