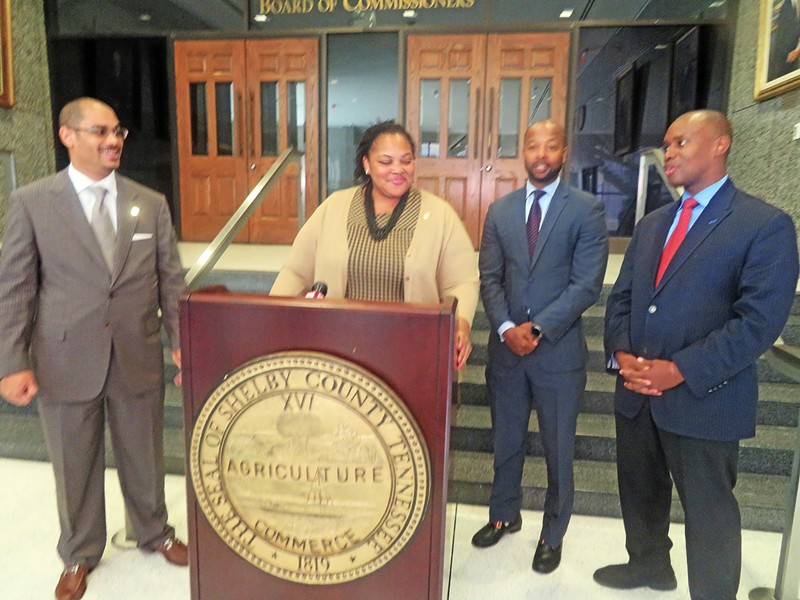 Anyone who wondered if District 7 County Commissioner Tami Sawyer would maintain her social activism in office can rest assured: She’s still on the case.

The point was made over and over on Wednesday during the second committee session held so far by the group of Shelby County Commissioners elected on August 2 and installed on August 30.

The well-known all-purpose reform advocate, best known for spearheading last year’s citizen campaign to remove Confederate statuaries downtown was much in evidence on Wednesday in numerous ways. These ranged from an insistence that routine county lawn-mowing contracts up for renewal be open to racial minorities to a repudiation of the former County administration’s wish to end federal oversight of Juvenile Court to an add-on resolution that would seek the automatic involvement of the Tennessee Bureau of Investigation in shooting incidents involving local law enforcement.

The add-on resolution, keyed to the Monday shooting of Martavius Banks, was intended as a joint one to be coordinated with the Memphis City Council. It was co-sponsored by District 9 Commissioner Ed Ford, who for the time being continues to serve as the District 6 member on the Council and, at the behest of new Commission chair Van Turner, is serving as a kind of official liaison between the two elected local bodies.

Sawyer and Ford were joined at a mid-afternoon announcement of the joint initiative in the lobby of the Vasco Smith County Administration Building by Commissioner Mickell Lowery of District 8 and chairman Turner, who represents Commission District 12.

Ultimately, noted Turner, the involvement of the TBI in investigating shooting cases, once approved by the Council as well as the Commission, would require action by the General Assembly in Nashville to become official.

Wednesday’s committee sessions were notable also for the presence of Mayor Lee Harris and County CAO Patrice Williamson-Thomas, who announced the appointment of former Juvenile Court magistrate Marlinee Clark Iverson to be new County Attorney. Harris also made known his intention to appoint an educational liaison official to coordinate communication between the various individuals, agencies and institutions involved with public education in Shelby County.

The Mayor also formally affirmed his decision, announced earlier, to name former Memphis City Attorney Herman Morris as Settlement Coordinator for the 2012 Memorandum of Agreement between Shelby County, the U.S Department of Justice, and Juvenile Court. Morris will replace Judge Paul Summers, whose contract for that role will expire in October.

Harris’ announcement, coupled with the Commission’s vote on Wednesday to formally recall the second of two letters written by former Mayor Mark Luttrell last year seeking an end to federal oversight of Juvenile Court operations, formally denotes a renewed solidarity of Mayor and Commission in committing Shelby County government to the path of reform mandated by DOJ. The 2012 Memorandum came in the wake of an investigation by the Justice Department that found a pattern of racial inequities and administrative irregularities in need of correction.

It would appear that Ingram’s appointment to directly serve the Commission in that capacity, officially fulfilling a desire held by the former Board of Commissioners and resisted by former Mayor Luttrell, would require at least the tacit consent of Mayor Harris and County Attorney Williamson-Thomas.

Turner also announced committee assignments for the new Commission on Wednesday. These, several of which gave Sawyer ample scope, were:

And the chairman also made appointments to various inter-agency boards and commissions. These were: