St. Jude outreach director calls Shelby County home and says Democratic nominee, a former childhood-cancer patient at the hospital, is "the real deal" and a "warrior" for the community 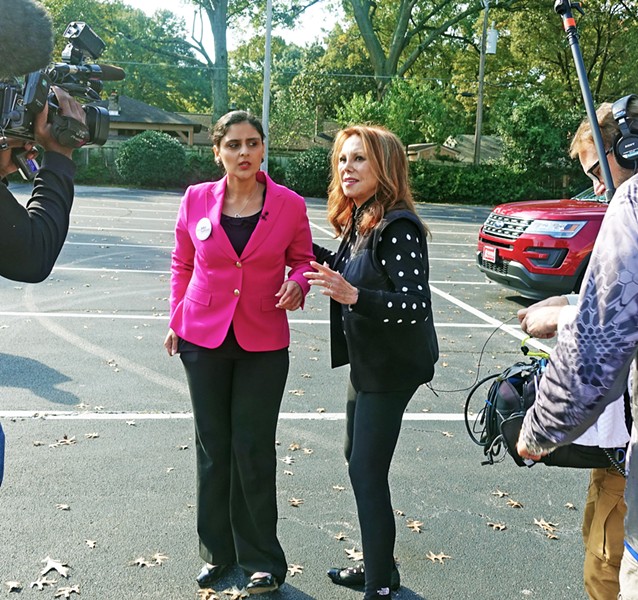 To Thomas, national outreach director for St. Jude Children’s Research Hospital and the daughter of St. Jude founder Danny Thomas, Gabby Salinas is “a warrior” fighting for her community as she had previously fought for her life at St. Jude as a victim of childhood cancer.

On Saturday, the two made a pair of stops together — at a morning fund-raiser at the Belltower Coffee Shop on Highland and later in the parking lot of White Station Church of Christ, an early-voting location.

Thomas said she was actively supporting Salinas, “an old and very good friend” whom she has known since Salinas was seven years old, because of the aforementioned warrior spirit, because of the candidate’s valuable “common sense,” and because of the public positions advocated by Salinas.

“She’s a good-hearted, good human being, and she knows about things like health care first-hand, and she’s fighting very hard for Medicaid expansion,” said Thomas, who mentioned such other Salinas concerns as education, infrastructure, jobs, agriculture, and tourism. “She brings moral values, has a moral sense and family values. When you get the real deal, you’ve got to support it.”

Thomas said, “I am very, very happy to get involved in Shelby County politics.” She said she considered Shelby County “home to the Thomases” and noted that her parents were by their choice buried here (they are interred in a mausoleum at St. Jude).

Salinas has been the subject of a series of attack ads directed against her by the campaign of Reoublican incumbent Brian Kelse and/or its supporters. Some of the ads refer to her as a “socialist” and one says that she "supports stealing benefits from our elderly," and supports Planned Parenthood, which "sells baby parts." Another ad makes a point of saying that Kelsey is “one of us,” and critics have charged it with being a “dog-whistle” message calling attention to Salinas’ birth in Bolivia.

When Gabby Salinas' cancer was detected at the age of 7, her entire family moved to Memphis with her so that she could be treated at St. Jude.