“It forces candidates to talk to everyone, instead of just that one base," says Tom Perez in appearance at "Seat at the Table" event at the National Civil Rights Museum. 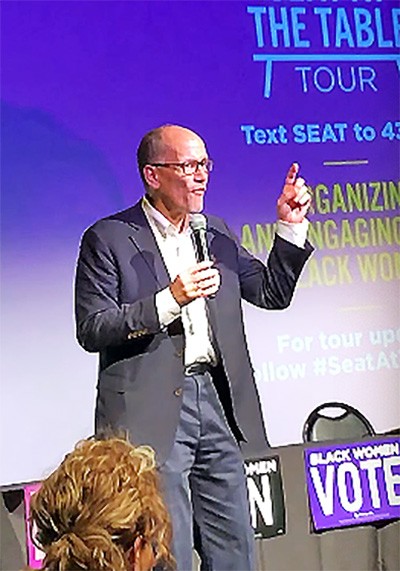 Tom Perez, the chairman of the Democratic National Committee, paid a stop in Memphis on Saturday, at the National Civil Rights Museum for an installment of the DNC’s “Seat at the Table” tour, designed to galvanize the involvement of African-American women in the party.

In his farewell message to attendees, Perez took note of one of the major issues on the November 6th ballot — the referendum for Memphis voters on repeal of Ranked Choice Voting, a method for determining winners, sans runoffs, in multi-candidate races in which no candidate has a majority.

“I’ve spent a lot of time on that issue,” said Perez, after giving a hat-tip to Steve Mulroy, the University of Memphis law professor and former county commissioner who has been a major proponent of RCV (aka Instant Runoff Voting), scheduled to be employed in the 2019 city election, unless repealed.

Perez suggested that "the Republicans” were “trying to take it away,” though in fact it was incumbents of the nonpartisan Memphis City Council who implanted the repeal referendum on the ballot.

“If I were living here, I’d vote no on that referendum, because you’ve already voted for it,” said Perez, who referred to a previous referendum, in 2008, when Memphis voters approved the process by a 70 percent majority. “It forces candidates to talk to everyone, instead of just that one base. It fosters civility because you can’t ignore 70 percent of the people.

Perez went on: “Talk to them! What a radical concept. That’s why y’all voted for it, and that’s why they don’t want it.”