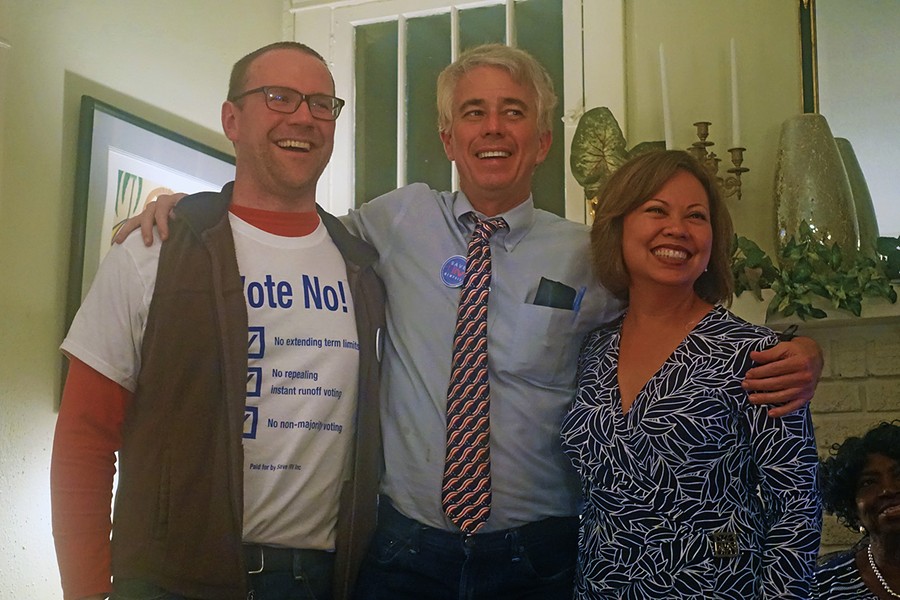 Note: For reasons that remain obscure, the following text, published in the early morning of November 7, vanished from online, to be replaced by an earlier election-highlights brief that was posted on election night itself. I am happy to see the longer piece, like Lazarus, freed from untimely interment and restored. — jb

When the final report was done, the last round poured, the surviving hors-d’oeuvres wilted, the election results locally mirrored those nationally. There were lots of near misses, college tries, and moral victories — mainly among Democrats who had aspired to overturn the verdict of 2016 (or, in many ways, of the last few decades).

But the inherent limitations of the near miss, the college try, and the moral victory would rapidly become obvious as the reality of defeat and the resilience of the status quo sunk in.

The purest and most unsullied triumph locally was enjoyed by the band of activists in Save IRV Memphis and their sympathizers, who resisted a concentrated effort by the Memphis City Council on behalf of three ballot referenda that, the activists contended, were designed to protect the incumbency of Council members.

To start there, the count was 62,316 for and 104,431 against in the case of Ordinance No. 5669, which would have repealed the prior 2008 referendum authorizing IRV (a method of vote -counting that successively redistributes runner-up votes in a given race until a majority winner emerges). The vote was 67,220 for and 101,607 against for Ordinance No. 5676, which (via language that was ambivalent, to say the least) would have lengthened term limits for mayor and Council members from two to three four-year terms. And Ordinance No. 5677, which would have abolished runoff elections altogether, lost out by a vote of 77,223 for and 91,184 against.
The Democratic candidates, all first-time candidates, who attempted to oust Republican state legislators in the suburbs, made a good run of it, but fell short. In the most avidly watched race, Gabby Salinas, the three-time cancer survivor and budding scientist lost to incumbent District 31 state Senator Brian Kelsey by the relatively narrow margin of 40,313 for Kelsey to 38,793 for Salinas.

Republican incumbent Mark White turned back Democrat Danielle Schonbaum in the District 83 House of Representatives race, 15,129 to 11,376. And incumbent GOP state Representative Jim Coley defeated Democrat Allan Creasy by a vote of 12,298 to 10,073 in District 97.

More decisive victories were won by Republican incumbent Kevin Vaughan over Democear Sanjeev Memula in House District 95 and by the GOP’s Tom Leatherwood (a ballot replacement for the late Ron Lollar) over Democrat Dave Cambron in District 99.

Democratic state Rep. Dwayne Thompson, an upset winner in 2016 in House District 96, retained his seat by a vote of 14,710 over 10,493 for Republican challenger Scorr McCormick.

In the races for Governor and the U.S. Senate, local totals were:

Though arguments on the point can and will rage indecisively, the statewide results possibly reflected the natural dispositions of red-state Tennessee in cases where the Democratic challenge is muted by politesse. Dean and Lee reciprocated their gentlemanly approaches to each other, while Bredesen’s acknowledgement of partisan differences was minimal to the point of non-existence.

Bredesen surely qualifies for the 2018 “Oh, Yeah?” award for his mid-race statement to Jonathan Martin of the New York Times: “I’m in the fortunate position that people on the left are enraged enough that they will find almost anything I do, with the D after my name, acceptable.”
Count that as arrogance or as self-deception. It was demonstrably incorrect.

Bredesen’s public embrace of President Trump’s Supreme Court nomination of Brett Kavanaugh and his suggestion in a late ad that he and Trump (“a skilled negotiator”) could blissfully work together to lower drug prices were downers to his base, whereas Democrat Beto O’Rourke’s throwdown of the gauntlet to Republican incumbent Ted Cruz in the Texas Senate race almost brought him a victory. Texas is clearly no more liberal a place than Tennessee.

The local difference in the gubernatorial and Senate races manifestly arose from the demographics of Shelby County, where Democratic turnout was at levels approximating those of presidential years. The stout showing of the Democratic challengers in legislative races was also buoyed by the turnout, a continuation of sorts of the blue wave that crested so strong in the august election.

The turnout factor was also prominent in the blowout win of 9th District Democratic Congressman Steve Cohen over GOP perennial Charlotte Bergmann, 143,690 to 34,710, though it was not too much help to Democratic challenger Erika Stotts Pearson in the wider West Tennessee expanse of the 8th Congressional District, where Republican incumbent David Kustoff triumphed, 66,889 to 32,578.

There were races in most of Shelby County's suburban municipalities, too — the most dramatic being those in Germantown and Lakeland, where the issues of city spending and economic development loomed large.

In Germantown, Mayor Mike Palazzolo apparently won reelection by the razor-thin margin of 10,240 to 10,113 for challenger John Barzizza, who declined to concede, pending a final certification of results. The main issue in the mayoral contest was Palazzolo’s backing of Thornwood, a mixed-use development on Germantown Parkway.

In Lakeland, where the primary issue was Mayor Wyatt Bunker’s development plans, including those for a new high school, Bunker was upset by challenger Mike Cunningham, 2,648 to 2,324.
Apparent winners for the city Commission were Richard Gonzales and Michelle Dial, while School Board winners were Kevin Floyd, Laura Harrison, and Deborah Thomas.