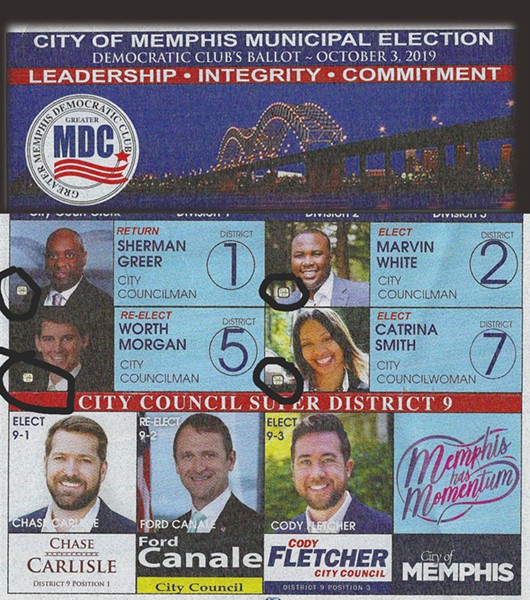 It wouldn’t be a local election without at least one case of the "Bogus-Ballot Syndrome" turning up, and, sure enough, there’s a brand-new example that District 5 City Council candidate John Marek is threatening legal action about.

Marek’s case in point is a printed sample ballot being mailed to households and passed out at early-voting polls bearing the imprimatur of the “Greater Memphis Democratic Club,” which may have some ersatz legal status but is known to be a shell organization, without members in the usual sense, that is conducted for profit for the benefit of its proprietors, the foremost of whom is political entrepreneur Greg Grant.

Grant’s is one of several such ballots that appears at election time, and it is no secret that many, if not all, of the endorsees for office listed on them paid good money to get there. Marek, in fact, says that he himself was solicited to purchase a place on the ballot and declined.

Despite being designated as being under “Democratic” auspices, the ballot features several candidates with known or suspected Republican identifies — including Council candidates Chase Carlisle, Ford Canale, and Worth Morgan, the latter, an incumbent, being Marek’s opponent.

Besides the matter of false political auspices, however, Marek also charges the Grant ballot with likely violations of city and state law, both of which, he says, prohibit the use of official governmental insignia. Several of the favored candidates on the ballot are pictured with facsimiles of the City of Memphis seal. On that account, Marek says he is considering filing an official injunction against further distribution of the ballot.

The Grant ballot, and other pay-for-play handouts like it, are not to be confused with sample ballots like the not-for-profit one openly sponsored by three Democratic public figures — Memphis Congressman Steve Cohen, Commissioner Van Turner, and former Democratic Party chairman David Cocke.

That ballot endorses Democrat Marek, among others.